The benefits of bicycle commuting 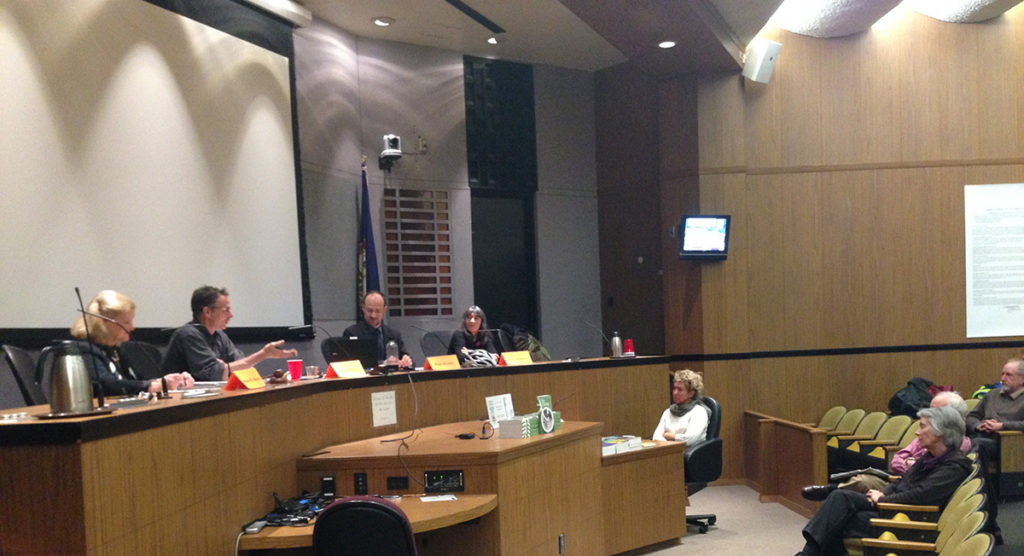 As Charlottesville officials contemplate the status of bicycles on roads such as West Main Street, Ralph Buehler, co-author of “City Cycling,” touted the benefits of cycling and offering solutions to concerns such as safety and infrastructure.

Buehler joined two local bike activists, Scott Paisley and Ruth Stornetta in a panel, Bicycle Community: Commuting Here and Abroad, in Charlottesville City Hall. The Wednesday event was one of several events kicking off the first day of the Virginia Festival of the Book.

Paisley received a scholarship to study bicycle design in 1981 and co-owns Blue Wheels Bicycles. Stornetta is a member of Bike Charlottesville and past ACC Collegiate Cycling Conference director among other bicycling accolades.

“Cycling is economical for those who cycle, but also for governments and business,” Buehler said. It can create retail sales, it is environmentally friendly, it is space efficient, it is energy efficient, it is healthy, and it is also fun.”

While the benefits of cycling can seem simple and straightforward, audience members raised concerns about safety and education.

“If there is a word for a car door opening on you [while cycling], it happened to me,” said audience member Kathy Welch. “It was terrifying. The pedal caught the door, and I was in the middle of the street with traffic flying by me.”

Buehler’s answer to safety was education. He gave an example from his own childhood in Germany.

It is up to policy makers to drive home the respect for cyclists, he said.

“In one European country, they teach motorists to open the driver door with their right hand, because you start looking [behind you] for cyclists,” Buehler said.

Those policies must work both ways, he said.

“Many of the tickets they give to cyclists [in Germany] are for safety reasons, like if a bicycle didn’t have brakes,” Buehler said. “You don’t have to pay it if you present your fixed bike.”

In addition to safety concerns, Buehler said there needed to be a social paradigm shift toward cycling.

“We’re still struggling with the social status of the car,” said Buehler. “As soon as [lower-income individuals] can afford a car, they use a car. If bicycling or walking become the more socially desirable thing, then that may change.”

While commuter cycling is much more popular in Western Europe, it wasn’t always that way, Paisley said.

“It is fascinating that from the ’50s to the mid ’70s, Germany and Denmark were just like us,” he said. “That was a real shock to my preconceived notion that they always had a bike culture.”

Bike Virginia board member Randy Salzman gave the example of the Danish capital, Copenhagen, being “intent on being Houston in the 1950s and early 1960s. Now they have at least five streets that are completely closed to cars.”

Stateside, Portland, Ore., and Minneapolis are good examples of American cities beginning to orient themselves toward the cycling community, Buehler said.

“You no longer need to look to Europe for good examples,” he said.