Forgotten no more: Descendants of family enslaved at Pen Park plantations visit their unmarked graves for the first time 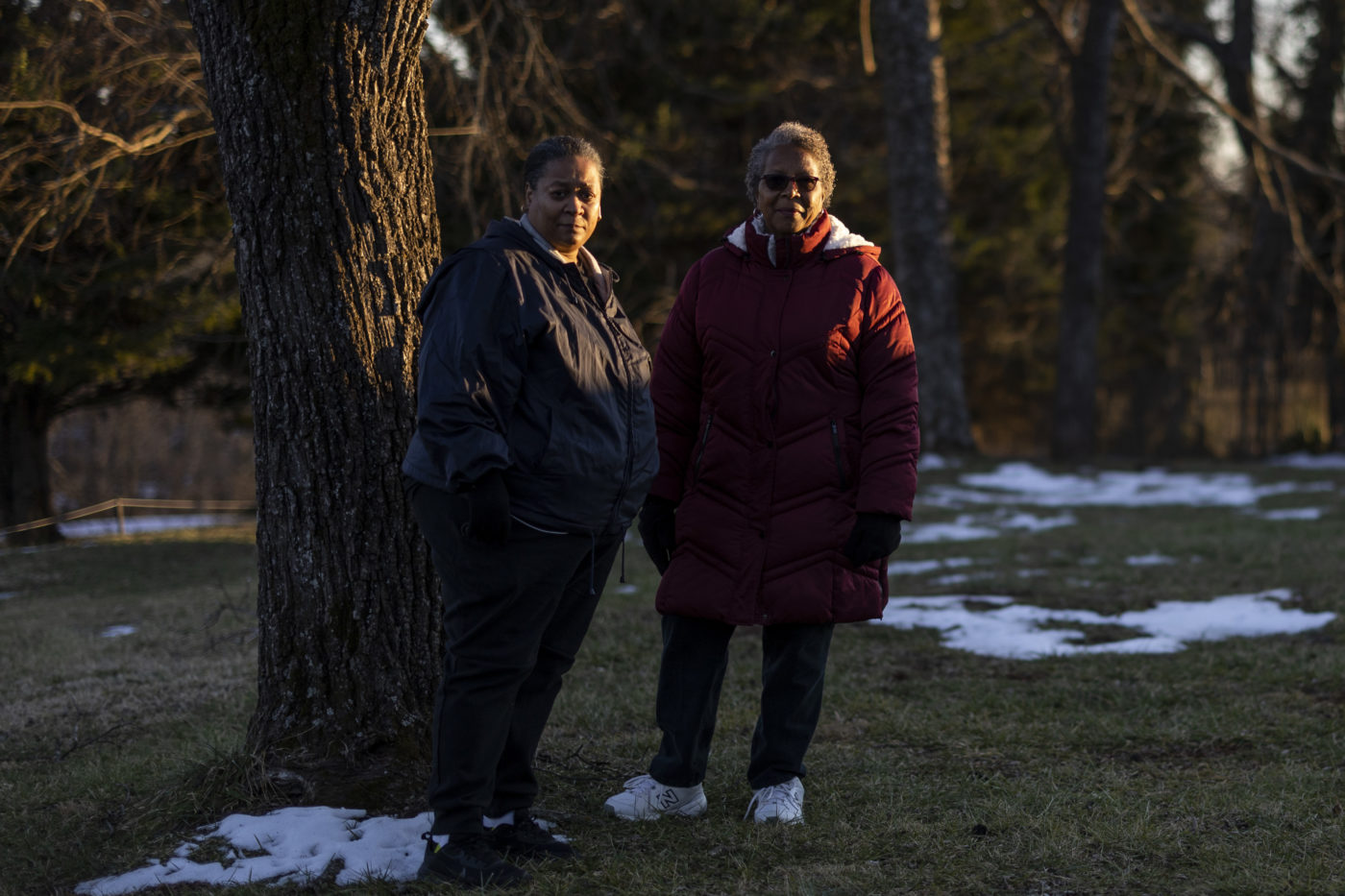 Michelle Waller-Stevens, 55, and Zelda Hines, 71, are among some of the suspected descendants of enslaved people historians believe are buried at Pen Park.

The Waller Family Reunion is more than just a simple family gathering. Through a Facebook group, the family schedules out a weekend every year for their dozens of relatives scattered across the country to celebrate.

For the past ten years, the family made it a point to host a farewell picnic at Pen Park in Charlottesville. But what they weren’t aware of is how the place is more than just where they gather.

A few hundred yards away from the Pen Park picnic shelters lie over a dozen unmarked indentations in the ground, showing the final resting places of enslaved people.

Some of those graves very likely hold the family’s ancestors.

“We were pulled by our ancestors to Pen Park,” Leah Ralls and her relatives laughed over a Zoom call with Charlottesville Tomorrow.

Ralls’ ancestors are believed to have been enslaved by the Gilmer family, the prominent owners of the plantation that was on the land that is now Pen Park. Historians strongly suspect that in the first half of the 19th century the people enslaved by the Pen Park masters were buried in unmarked graves adjacent to the white family’s marked cemetery. Because the graves of those enslaved were unmarked, they were lost with time, falling into the past as the rest of the community moved on.

That started to change in the early 2000s when an anthropologist named Lynn Rainville discovered indentations near the family plots in Pen Park and suspected they were burial sites. In 2003, Rainville, director of Institutional History at Washington and Lee University, added her findings to a website that tracks old Black cemeteries in Central Virginia.

The Pen Park graves are featured on the site but at the time, she didn’t have any information on who was buried there. The account of the indentations remained that way for almost two decades until Charlottesville officials began researching the plots.

Jeff Werner, planner for Charlottesville’s historic preservation program, said he was unaware of the existence of the graves until he visited them in 2019. A descendant of the family that once owned the Pen Park plantation contacted Werner about laying her mother to rest in the family’s cemetery. The plots had been untouched for decades. 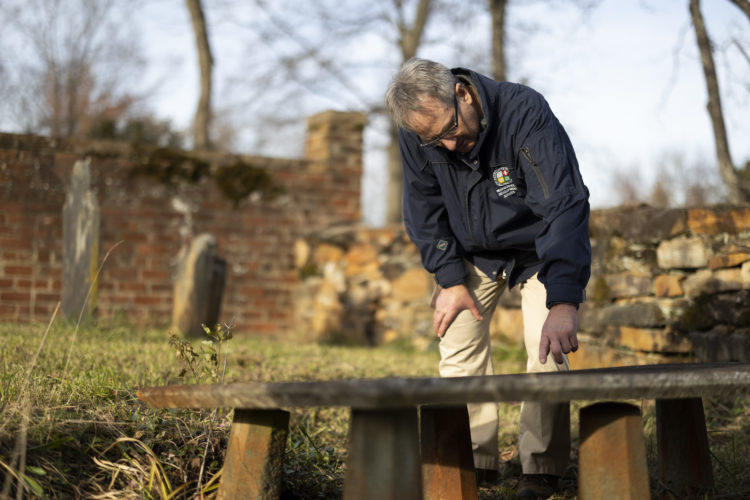 Jeff Werner, planner for Charlottesville Historic Preservation and Design, points to a grave at the cemetery in Pen Park in 2021.

When visiting, he noticed the depressions on the ground near the white family’s graves. So he did some research and found Rainville and her Black cemetery index.

Now, city officials are trying to not only identify the people buried in those plots, they’re looking for the descendants of those people. The work is part of a larger project called “Behind the Walls,” a partnership between the Albemarle Charlottesville Historical Society and the city of Charlottesville. The project aims to work with those descendants to better memorialize the unmarked cemetery.

So far, the city has hired firms to survey the area with ground-penetrating radar. The radar detected what are likely 43 graves, but they cannot be positive unless they excavate the ground.

Locating the descendants of those buried at Pen Park is challenging and, in some cases, might be impossible. The researchers are combing through salvaged documents — from the plantation owners, funeral homes, city tax offices and more — and connecting common last names with people in the community. 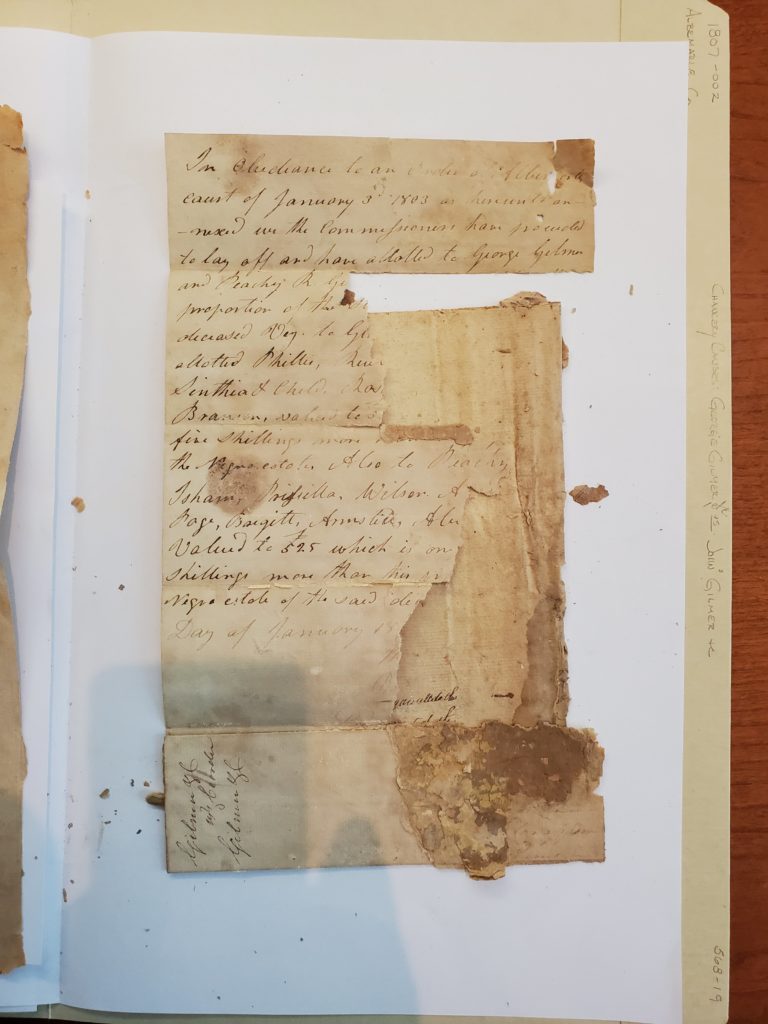 A document from 1803 contains the names of enslaved laborers at Pen Park. It was part of the estate of George and Peachy Gilmer, who owned a plantation on what is now Pen Park.

J.F. Bell Funeral Home records have been a great source for finding Waller and Gilmer descendants, said Sam Towler, a researcher at the Historical Society. Their records are online, which makes the search for names simple.

Werner was looking at one such record last summer when he spotted a name he recognized. It was John Gilmer Waller. The name just so happened to be the last name of Stephen Waller, a colleague of Werner’s for more than 20 years. Stephen Waller recognized the name immediately as his great grandfather.

A family discovers their ancestor

John Gilmer Waller Sr. was not enslaved, but his name suggests he is descended from enslaved people at Pen Park because he shares a last name with one of the previous white owners there. It was a common practice during the antebellum period, before the Civil War, for enslaved people to be given the last names of their owners.

There’s more evidence — Waller’s mother’s maiden name was Wormley, which was the last name of some people enslaved at Pen Park.

Stephen Waller’s link to Pen Park is strongly possible, but not certain, Werner said. The researchers are confident that the connections are true based on the evidence, but there’s not enough evidence to be certain. For example, one historic document researchers found that contains information about people enslaved at the plantation only displays the first names of a portion of the enslaved laborers. The document is also torn, hinting at more clues for researchers to uncover.

“A case could be made that it is very likely that their descendants are buried outside the walls,” Werner said. “We just don’t know who, and we don’t know when. But we know that there is somebody.” 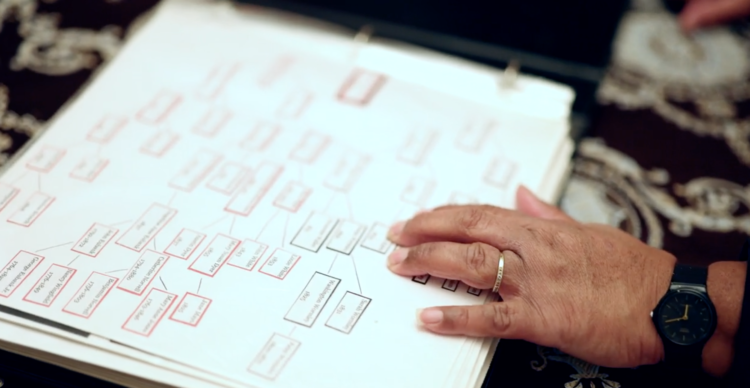 Michelle Waller-Stevens goes through the Waller family book at her home in Charlottesville. The family tree leads back John Gilmer Waller and his mother, Susan Wormley, who they suspect are descendants of enslaved people at Pen Park.

The Waller family is, in large part, descended from enslaved people who lived all over Charlottesville and Albemarle County. Today, they still use the last names given to their ancestors by their owners. And more than 160 years later, they still meet for annual reunions.

Since this new discovery, the families have been working on connecting the dots.

“I don’t think anyone knew that maybe a few thousand yards away, some of our direct ancestors were laid to rest in that same park,” Stephen Waller said.

The Gilmer and Waller families are the first descendants identified by the “Behind the Walls” project. Researchers are hoping to find more and then build a committee of descendants to make plans to properly memorialize the unmarked graves.

Extracting DNA from the possible graves can be done, but it presents more challenges. The bodies are completely decomposed after nearly 200 years. Advancements in extraction technology can collect data from the soil in the suspected grave divots, but it would take another expert to interpret.

That isn’t out of the picture, Werner said, but it won’t happen unless the descendants wish to pursue it.

Finding the descendants of those buried in Pen Park isn’t the last hurdle.

The Pen Park graves are among many lost cemeteries scattered across Central Virginia and the South. Often, it’s difficult to obtain funding to suitably preserve cemeteries, especially Black cemeteries, due to low interest or lack of research, said Rainville, who made the Black cemetery index. 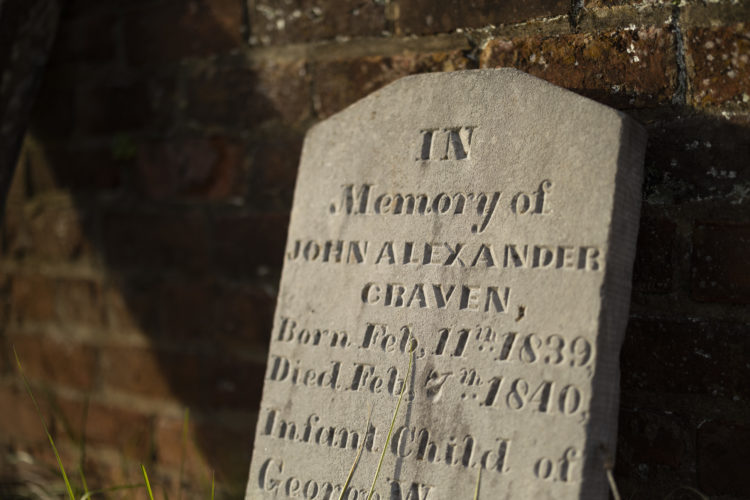 The cemetery is home to three prominent white families, the Gilmers, Hotopps and Cravens, who previously owned a plantation that is now Pen Park. Some of the people they enslaved are believed to have been buried near the family graveyard.

White family cemeteries on plantations are usually built on secluded land — partitioned off with different forms of fencing and marked by headstones — and require minimum maintenance.

It’s much harder for cemeteries that hold enslaved people.

That’s exactly the case for the Pen Park cemeteries. The white Gilmer, along with Hotopp and Craven, families are buried in the park nestled off to the side of the Meadowcreek Golf Course.

Three small, conjoined plots of land, segregated by a rusted fence or antiquated cobblestone, hold the families who previously owned the plantation. Varying headstones poke out of the high grass within the mini cemeteries, indicating names of family members dated as far back as 1795, and as young as a year old.

The suspected Black graves are easy to miss. Adjacent to the white cemetery is practically nothing – a number of trees are sprinkled throughout the patch of land just yards away from a paved trail used for the golf course. 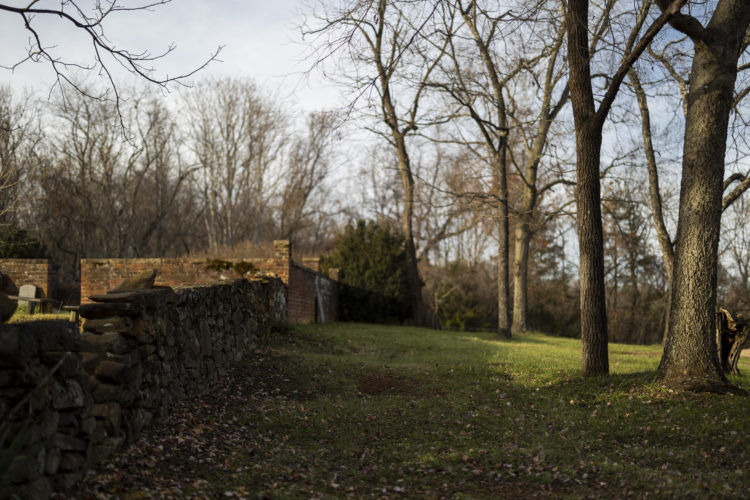 The unmarked burial spots of enslaved people are usually recognizable by visible depressions on the ground near white families’ cemeteries. That is the case with the Pen Park graves, where depressions can be seen outside the walls of the marked graveyard.

How enslaved people were buried without markers isn’t much different than other similar sites.

For instance, in 2001, Monticello discovered lost graves of enslaved laborers near an active parking lot. Often plantation owners would repurpose Black cemeteries for other uses. Archaeologists at Monticello found that the land where the enslaved people were buried served as a deer park and had a plantation roadway running through it, according to a Monticello newsletter.

Approximately 20 divots were found near the parking lot of Monticello by archeologists. The space was later sectioned off and given a sign indicating the presence of the graves. If it had been Thomas Jefferson’s burial ground, or any of his white family members or other white plantation owners, it would have never been the site of a parking lot, Rainville said.

Because they’re not marked, Black cemeteries are susceptible to things like construction projects. And even when they are marked, they are more susceptible to vandalism, Rainville said. Even with the presence of gravestones or markers, Black cemeteries will continue to suffer discrimination when it comes to their conservation. The limitations brought on by the lack of research and documentation can be difficult to navigate, Rainville said, but is “fundamentally necessary.”

“It’s not like there’s a ton of money to do historic research,” Rainville said. “There is an extra category of systemic racism here.”

Werner, alongside historians and the Albemarle Charlottesville Historical Society, are in the midst of the extensive process of finding additional descendants. Werner roped off the graves to prevent park activity, like passing golf carts, from tampering with the graves any further.

Despite the difficulties in locating descendants — and funding — Werner said he is committed to moving forward with rightfully memorializing the Pen Park graves. This part of the research is particularly arduous as there is no guidebook to handling the potential wishes of the descendants, Werner said.

“I think we’ve got a way to go before we can really have that conversation,” Werner said.

The Pen Park cemetery is on city grounds so the city could be responsible for items — such as markers or headstones — but that has yet to be determined.

“With Black families,” Rainville said, “don’t engage in discussions about what you should or shouldn’t do until you try to locate descendants and see what they want done.”