Dumler resigns from Albemarle Board of Supervisors 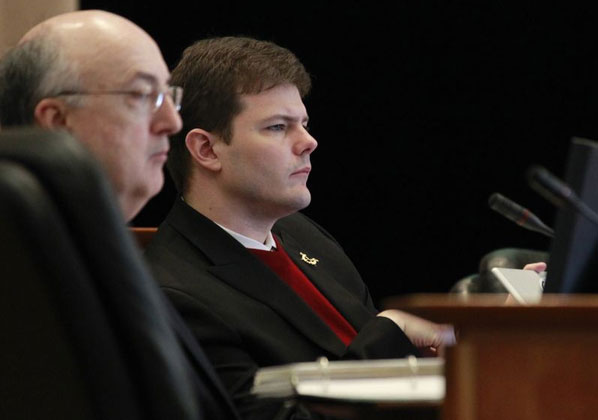 Supervisor Christopher Dumler at the February 6, 2013 meeting of the Board of Supervisors

http://s3.amazonaws.com/cville/cm/mutlimedia/20130605-Dumler-Resignation.pdf Impact of Dumler’s continued service gets more debateAlbemarle Democrats cancel Dumler appearanceAudio & Video of Albemarle Supervisor candidate forum - Scottsville District
Albemarle County Supervisor Christopher J. Dumler quit Wednesday, five days after a county circuit court judge rejected a petition to remove him in the wake of his guilty plea to misdemeanor sexual battery.
“I wasn’t prepared to even grant the petition the appearance of validity by resigning while it was pending,” Dumler said in an exclusive interview with Charlottesville Tomorrow.
Dumler handed his letter of resignation to Duane E. Snow on Monday, and Snow read the announcement at the beginning of the meeting.
“It is my prayer and hope that the community will forgive and move forward,” Snow said. “To those most affected by sexual abuse we offer you our support.”
Dumler did not attend the meeting, ending a 17-month tenure as the representative for the Scottsville District.
However, several uniformed Albemarle police officers were in place, as they have been since protests got underway in February. Two signs calling on Dumler to resign had been placed in the window.
“In the sense of trying to heal, can we take the signs down?” asked Supervisor Kenneth C. Boyd.
“I’ll be glad to do it now that Chris is no longer here,” said Steven Peters, a Scottsville District resident who has been to several meetings to protest.
Supervisor Dennis S. Rooker thanked Dumler for taking the action.
“I think it clearly is in the best interest of the county, and in his personal best interest because it allows him to move on and build a new life,” Rooker said.
Dumler pleaded to a misdemeanor charge of sexual battery on Jan. 31 after originally being charged with one count of forcible sodomy. The plea meant he could stay in office, but protesters spoke out at supervisors’ meetings calling on him to resign. They managed to collect well over the 372 signatures needed under state code to trigger the court’s review.
“Once the recall petition attempt began, I realized I had to see that process through to the end, because of the nature of the allegations being made,” Dumler said.
“It’s one thing to dislike me politically, or believe that I shouldn’t maintain my seat because of the misdemeanor I entered in to a plea agreement for, but it’s another entirely to forgo the seat I was democratically elected to under the shadow of an allegation of neglect, incompetence, or misuse of office,” Dumler added.
Judge Cheryl Higgins ruled last month that Lynchburg Commonwealth’s Attorney Michael Doucette, appointed as special prosecutor in the trial, did not prove that Dumler’s actions as a supervisor had been affected by his crime.
“Since I was elected, I’ve put over 60 hours a week in to county business, put thousands of miles on my car, and sent thousands of e-mails, made hundreds of phone calls, and had countless meetings with constituents, applicants, elected officials, and Albemarle County staff on the issues I was elected to advocate for,” Dumler said.
Dumler said he was successful in preventing the consolidation of several elementary schools in his Scottsville district and helped secure money from the Virginia Department of Transportation for safety improvements on Route 20.
Dumler did not say what he intends to do now that he no longer is an elected official.
“For the next little while, I intend to take a vacation, visit with family and friends, and plan the next stages of my life,” Dumler said.
State law gives the board 45 days to appoint an interim supervisor until a special election can be held. The winner would serve until the end of 2015, when Dumler’s term in the Scottsville District was set to expire. He became the youngest supervisor in county history after being elected in 2011.
The most likely time for such a contest will be during the Nov. 5 general election, according to County Executive Thomas Foley.
Dumler’s resignation ends a tumultuous time for the Board of Supervisors.
The Board of Supervisors voted unanimously Feb. 6 to censure him and 3-2 urging him to resign. Democrats later called on Dumler, once a rising star in the party, to step down.
Until Wednesday, he had not heeded the call.
The news means that four of Albemarle’s six magisterial districts will have supervisor races this fall, including the special election.
The last Supervisor to resign was Gerald Fisher in 1987.
The county will advertise for applications for the vacancy with a June 20 deadline. The public and supervisors will be able to review those applications through July 2. On July 3, applicants will make their case before the board in public session and the supervisors will go into closed session to make a selection.
“I think we’re looking for a placeholder and not someone who is looking to run for election in the fall,” Snow
“I want this to be as transparent as possible for the residents of Scottsville,” Boyd said.