The solution to traffic congestion on U.S. 29 might not be Albemarle County’s master plan or the Western Bypass. The solution, some university students say, might be to better utilize new technology and some old-fashioned transportation choices.

This past week, groups of students from the University of Virginia’s School of Architecture have asked how technology and transportation can address U.S. 29’s challenges during the school’s third annual Vortex competition.

“We suspect there will be a boom in technological advancement — in particular, the self-driving car,” said architecture graduate student Christopher Young.

“We are going to intensify Route 29 and make it more of a thoroughfare,” said architecture undergraduate Roshni Mahtani.

“We’re adding a lot more of a bike network,” said graduate landscape architecture student Meg Graham. “[We are] moving towards something that other parts of the world are doing, which requires no technology, but is still forward thinking.”

Students were divided up into 30 multi-disciplinary groups, some with five students and others with 15. After the final presentations, judges will choose a competition winner.

While the groups can’t predict the future with complete accuracy, they are searching for solutions to a common American problem — a pattern of sprawling human settlement outside of cities.

“Route 29 is not, for all intents and purpose, a unique development,” Young said. “[Sprawl] exists in many cities, and so we are stepping back to look at how our intervention could be used in many cities.”

“It is fascinating to bring someone from that [European] perspective,” said graduate architecture student Ryan Carbone. “He is not necessarily an expert on the American type of sprawl, but I think that brings its own element of uncertainty, and I like that.”

Students met with de Geyter at least twice during the week for feedback and input on their project.

“There has been a great deal of conceptual discussion at this point,” Carbone said. “For a competition, it needs to be a really clear idea that people can identify with.”

Students said they began their process by looking at the larger themes and issues present with this common American roadway before moving forward.

“We’re here to push the boundaries and help residents see what could happen,” Graham said. 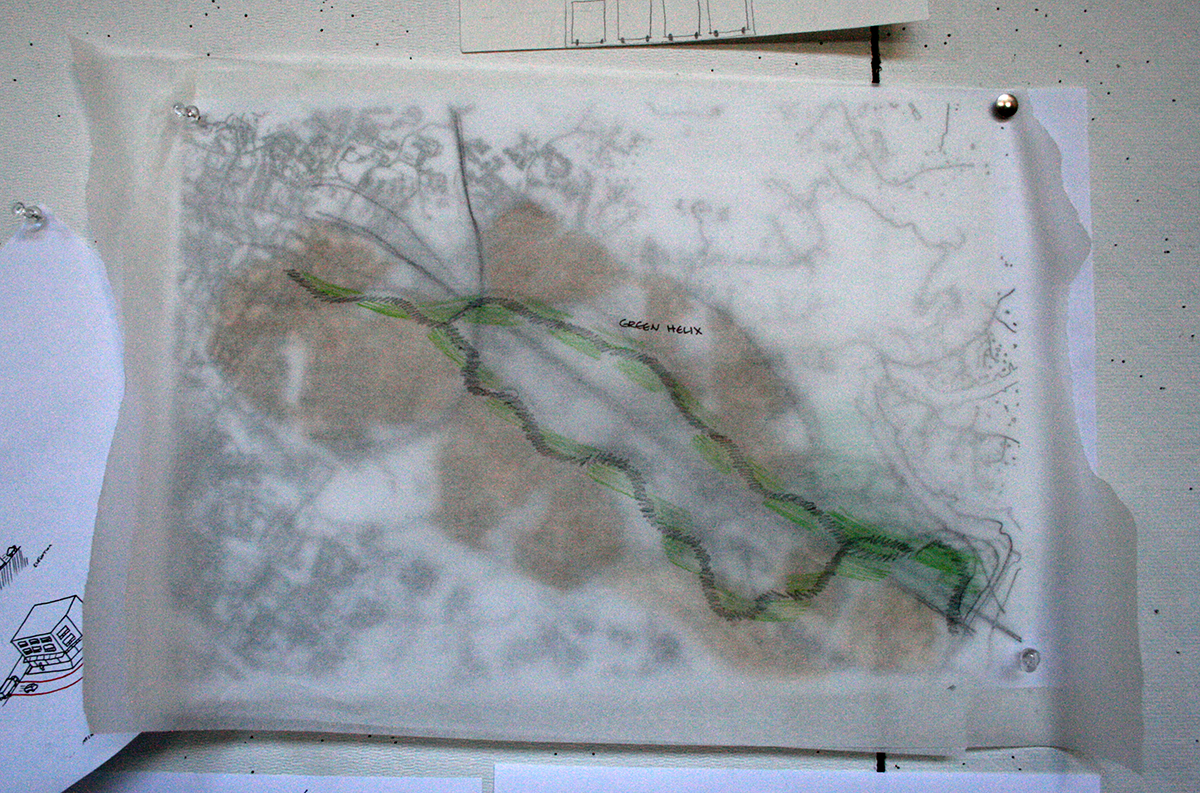 At the Vortex kickoff last week, a panel of local activists encouraged students to think big, and they are getting exactly what they asked for.

“[Our professor] is pushing us towards something that is new and creative, a way to change the conversation,” Young said. “You could be dropped off at a store and [the self-driven car] could come pick you up. You can almost eliminate parking.”

Graduate architecture student Elizabeth O’Brien’s team plans phases of change and development for U.S. 29 starting in 2014 and finishing in 2060. “It is not that futuristic,” she said, “simply different.”

“By 2060, Route 29 will be completely reforested, and we will have this major transit line that runs in the median of 29 with a few major stops,” O’Brien said of her plan. “We’ll have elevated bike- and walkways in some portions.”

“The economic base here can only support so much,” Graham said. “Outrageous ideas can happen, but at a certain scale and economic viability.”

Graham and her team considered how the corridor likely will develop, rather than imposing their most radical ideas on 29.

“We’re proposing that over time, those [scattered] businesses will want to move to places where commercial areas are more dense,” Graham said.

“We’re thinking about words like ‘inhabit 29’ or ‘inhabit the highway,’” Graham’s teammate O’Brien said. “It’s about bringing the human scale to 29.”

Overall, the students said they have enjoyed the project, the change of pace and having a different type of opportunity to learn.

“It is a lot of hours, but fun and different,” Young said. “This week is about sparking a conversation.”

There will be a public presentation of the student projects from 11 a.m. to 4:30 p.m. Sunday at the Carver Recreation Center.

Since you're probably here because you liked something you read or a friend told you to check us out, subscribe!

The best way to reach us is by messaging us through this website. This way, your note will reach the right people on our team and we’ll have the right information to respond.