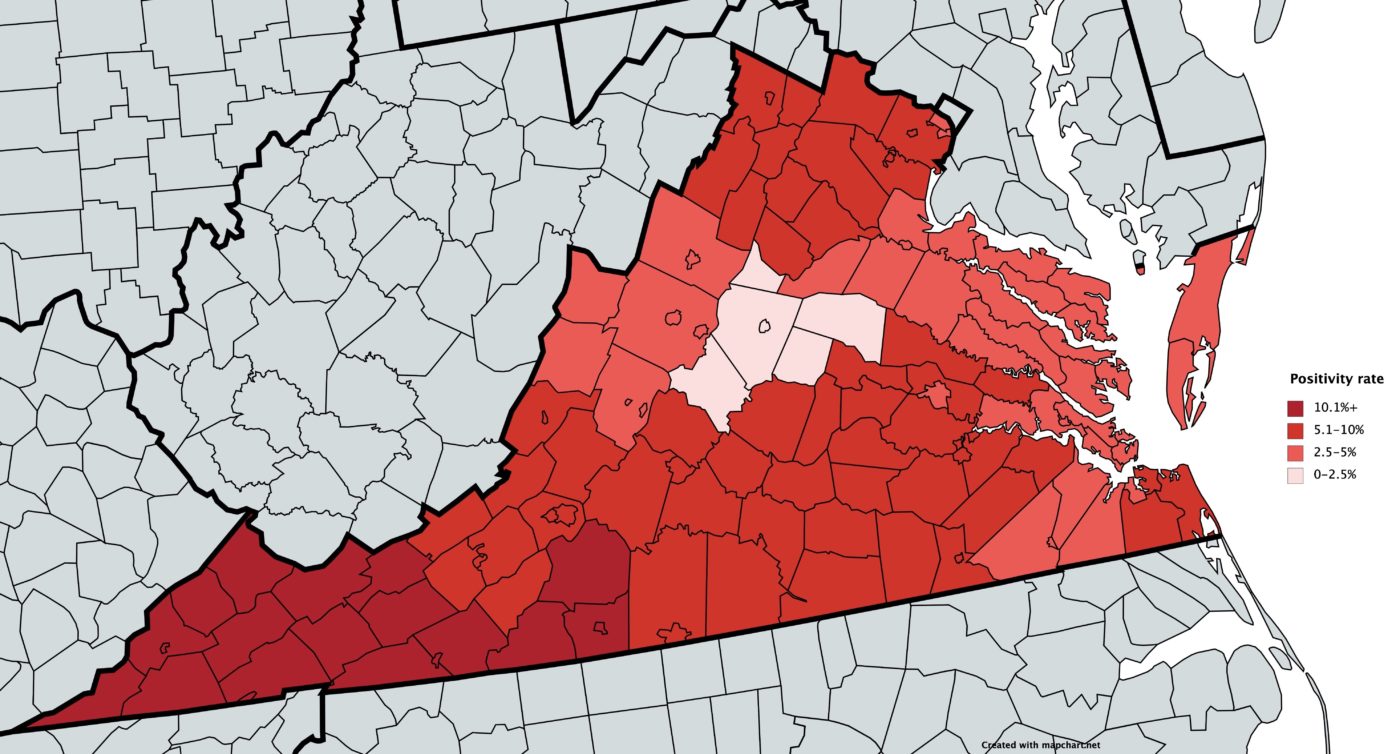 This map shows the positivity rate of COVID-19 tests in Virginia's health districts. The pink area in the middle is the Thomas Jefferson Health District. Positivity rate is one measure that shows how well a community has contained the spread of coronavirus. The TJHD conducts a comparably high number of tests compared to other health districts because of the 1,000 a week given to students by the University of Virginia.

While coronavirus cases in the past weeks have spiked across Virginia and elsewhere in the country, the trend in the Charlottesville-area has been quietly moving in the opposite direction.

The number of new cases in the Thomas Jefferson Health District, with a few exceptions, have trended down since the beginning of October. Other indicators are also positive here. The TJHD has the lowest positivity rate in the state, and the number of cases per 100,000 people is also comparatively low.

“That’s amazing,” said Ashley Tharpe, the president of the Virginia Public Health Association, as she examined the TJHD’s COVID-19 statistics Tuesday, when the positivity rate stood at 1.8%. It has since risen to 2.2%. “Wow. It definitely makes me hopeful for the future if cases there are that low.”

Elsewhere in the state, the outlook is far more troubling. New COVID-19 cases spiked this week across Virginia, prompting Gov. Ralph Northam on Tuesday to hold a news conference warning Virginians to “not get complacent.”

Tuesday marked the state’s fifth straight day with more than 1,000 new cases statewide, a trend that continued into Thursday. And the overall positivity rate for Virginia increased from below 5% a few weeks ago to above 6%.

The difference between the local trend, and that of the state, is striking.

“My initial thought is you guys [in the TJHD] are definitely doing something right to control the cases,” Tharpe said.

There is no smoking gun to point to, said Dr. Mitchell Rosner, chair of the University of Virginia’s Department of Medicine. But part of Charlottesville’s secret could be that people here are simply more willing — and likely — to wear masks in public.

It is rare to see an unmasked person in a Charlottesville grocery store or other public building. And many residents even sport facial coverings while walking on the sidewalk.

This is simply not the case elsewhere in the state, Rosner said.

“If you go to other communities, even in Virginia, places like Lynchburg, you don’t see many people wearing masks,” Rosner said. “I think that matters.”

Tharpe, who lives in Lynchburg, said much of the same thing.

“Just going to Walmart on the weekends I see a lot of people not wearing masks — even though there are signs everywhere saying to stay masked up,” she said. “I think every place, every small town and every city, has a slightly different culture that’s approaching it. And it matters. When everyone is taking the same precautions, it kind of creates a little bubble of protection.”

This phenomenon is not unique to Virginia. Across the country, areas that — for whatever reason — take mask wearing and other safety measures seriously tend to have lower rates of coronavirus cases, said Jeremy Youde, dean of the College of Liberal Arts at the University of Minnesota, Duluth, who is an expert in global health and pandemics.

“That social norm is so important,” Youde said. “Let’s just be upfront about it, it’s kind of awkward to remember to make sure that you’re wearing your mask. It’s not something that we’re used to. But when you know that everyone else is doing that, too, when you see that in the community and it becomes the sort of norm and expectation, it becomes that much easier.”

And those norms go beyond the masks, he added. People in places with higher rates of mask wearing tend to fall naturally into following other safety measures — like restricting large gatherings, frequently cleaning communal spaces and maintaining physical distance between people.

The other factor likely working in Charlottesville’s favor is the aggressive approach UVA has taken to controlling COVID-19 cases among its students.

Since the university began in-person classes in early September, the arch of new COVID cases for the TJHD has more or less followed that of UVA.

Two months ago, UVA appeared to be on the verge of shutting down as coronavirus cases in the student body skyrocketed. On Sept. 18, there were 259 active student cases and more than a quarter of the quarantine rooms were full.

That week, President Jim Ryan announced a series of strict COVID-safety rules students had to follow or risk suspension. Masks were to be worn at all times in public — whether on Grounds or off. Gatherings were restricted to five people and travel outside of Charlottesville or hosting out-of-town guests was highly discouraged.

At the same time, the university majorly increased its testing and quarantining efforts. Currently, every student living in on-Grounds housing is tested once a week, UVA’s Rosner said. Students living off Grounds also are regularly tested.

The students who test positive are put into isolation rooms, and the students the health department determines had “close contact” with them are moved into quarantine housing.

“That’s really important because we’re learning that young people are more likely to have the virus and have no symptoms,” Rosner said.

The university plans to perform yet more testing when students return to school for the spring semester, he added.

“We don’t have a lot of tools in our tool shed to fight COVID,” Rosner said. “We can limit contact and lock down the students. And the second is really aggressively testing.”

The approach turned out to be a resounding success. A month after implementing it, the number of active student cases fell some 75% to 57. And last week, they bottomed out at 14.

The timing of the university’s fall in COVID cases aligns almost exactly with the fall in the overall TJHD numbers.

These results are undoubtedly a good sign, Rosner said. But, it doesn’t mean it will last.

“This is a really humbling virus,” Rosner said. “What we find over and over again is that if you let your guard down, it finds a way to get in.”

After hitting their all time low last week, student cases began climbing again on Nov. 5. By Thursday, there were 47. Predictably, the overall health district’s numbers have also crept up slightly, reaching 2.2% on Thursday.

Students will be going home for winter break on Nov. 24, which means that the university will have to contend with students returning from areas with likely higher COVID rates than Charlottesville when the J-term begins in January and on a larger scale in February for the spring semester.

The other issue that’s concerning health officials is the rapidly growing number of cases in communities that surround the TJHD — which threaten to become yet more severe as the weather cools and seasonal holiday celebrations begin.

“Unless you’re going to build a wall around the entire [health district], you’re not going to be able to keep that movement out,” the University of Minnesota’s Youde said. “Without a more broad reduction in cases, the chances are that we’re likely going to see cases going up in Charlottesville and the surrounding area.”