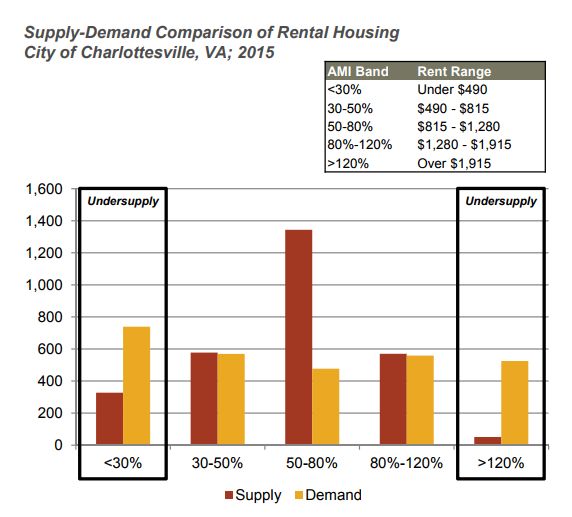 As housing prices in Charlottesville continue to rise, some in the community are calling on local officials to take steps to create more affordable living choices for households with lower incomes.

“We need to do something affirmatively and intentionally to correct the market, which is not providing $700 apartments for certified nursing assistants who are trying to raise a family [on a salary of $28,000],” said Ridge Schuyler, vice president of self-sufficiency at Piedmont Virginia Community College.

On Monday, the City Council will vote on a legislative wish list for the next General Assembly that will seek permission for one possible method to require developers to build affordable units.

“We strongly advocate that the state should consider enactment of legislation authorizing inclusionary zoning ordinances,” reads a draft legislative agenda up for consideration.

Inclusionary zoning polices are a way to guarantee that housing in growing communities is within reach of people who make less than an area’s annual median income.

“What that means is that 10 [percent] to 15 percent of every project has to be some form of affordable housing,” said Stockton Williams, executive director of the Terwilliger Center for Housing at the Urban Land Institute.

However, Charlottesville cannot adopt an inclusionary zoning ordinance because it is not on a list of localities that have been given that ability by the General Assembly.

Virginia is a Dillon Rule state, which means localities cannot pass ordinances for specific policy tools unless they have received permission from the state legislature in the form of “enabling authority.”

Charlottesville can currently grant a developer additional density without a rezoning if they agree to build some affordable units. However, the mechanics of such “bonus” density can be confusing both to developers and staff.

“In localities where there is an affordable housing crisis, market forces are not delivering new affordable units, and the over-complexity of the density bonus provisions within [Virginia law] makes that statute difficult to interpret and apply,” the legislative request continues.

Last year’s legislative request only asked for “flexibility in the establishment of local housing programs and in the use of public funding for the promotion and establishment of affordable housing.”

On Nov. 7, Democrats picked up at least 15 seats in the House of Delegates, resulting in a narrow two-seat majority for Republicans.

The exact makeup of the House will not be known until after any recounts are completed. Republicans have a two-seat majority in the Virginia Senate and the next scheduled election for that body is in November 2019.

“A number of these newly elected Democrat members, especially in Northern Virginia, were very interested in inclusionary zoning and I think the door is open to now approach them to seriously revisit this,” said Zack Miller, policy director for the Virginia Housing Alliance. “Advocates have talked about it … but there really hasn’t been a push in this area for a number of years.”

Albemarle County is one of a handful of localities in Virginia that is allowed to adopt an inclusionary zoning ordinance but has not done so. That may change now that legislation passed by the General Assembly in 2016 put tight restrictions on what proffers localities could require through zoning changes.

“We felt it was better to go with more of a voluntary system rather a mandatory system, but I suspect using this enabling legislation will be something that will be discussed as we go forward absent being able to do proffers,” said Ron White, Albemarle’s chief of housing.

Until last year, Albemarle required developers who asked for a rezoning for additional residential density to set aside 15 percent of units as affordable units.

However, White said many developers opted not to ask for rezoning in the development area because the existing zoning already allows for high density.

“What we found is that in most of the development area, adopting an ordinance would not mean a lot to us because of the up-zoning that has already been done,” White said.

White said that if county officials want to adopt an inclusionary zoning provision, they should first study the issue to ensure there are no unintended consequences.

Even without inclusionary zoning, Charlottesville officials are wrestling with ways to increase the number of affordable housing units.

The city’s Housing Advisory Committee has spent well over a year combing through recommendations made in a study conducted by the Richard Charles Lesser Co. in 2015 and presented to the City Council in 2016.

The city is also in the midst of updating its Comprehensive Plan, a document intended to inform the council’s policy decisions. The current plan, as well as a draft update, call for 15 percent of the city’s total housing stock to be “supported” housing.

The draft plan calls upon the city to “encourage creation of new, on-site affordable housing as part of the residential portions of rezoning or special-use permit applications with an emphasis on provision of affordable housing for those with the greatest need.”

Much that is in the draft plan is already underway or under consideration. The council is expected to vote Monday on a $75,000 program to encourage more private property owners to rent at below-market levels. Recommendations also include waiving fees for developers who pledge to build units for people who can’t afford market-rate housing.

But many in the community said more must be done to get more units actually built.

Grant Duffield, executive director of the Charlottesville Redevelopment and Housing Authority, said the city must create distinct categories for extremely low-income households who will never be served by the market.

The federal definition of affordable housing is 80 percent of the area median income, which is well above what many in CRHA and other subsidized communities can afford.

“If we say we’re trying to incentivize affordable housing, we’re not pushing the needle,” Duffield said.

The head of one local nonprofit homebuilder said the key is to have it make business sense for developers.

Whether through incentives or through inclusionary zoning, Dan Rosensweig, of Habitat for Humanity of Greater Charlottesville, said the height of future buildings could be tied to meeting the city’s goals.

“If you can build one floor or two floors of market-rate stuff, you could build six floors with four of them affordable,” Rosensweig said. “At some point, the economics are going to make it feasible.”

Another member of Charlottesville’s Housing Advisory Committee said that no matter what, the city needs tools that can directly address the market.

One housing activist said he hopes the city can get the ability to adopt an inclusionary zoning ordinance.

“Inclusionary zoning is definitely the prize,” said Brandon Collins, of the Public Housing Association of Residents. “I believe, PHAR believes and a lot of our partners believe that a lot of energy could be put into getting this legislation passed and that it’s worth the effort to have an all-hands-on-deck approach to that.”

Collins said if cities were allowed to include inclusionary provisions in the zoning code, it would change the conversation regarding incentives.