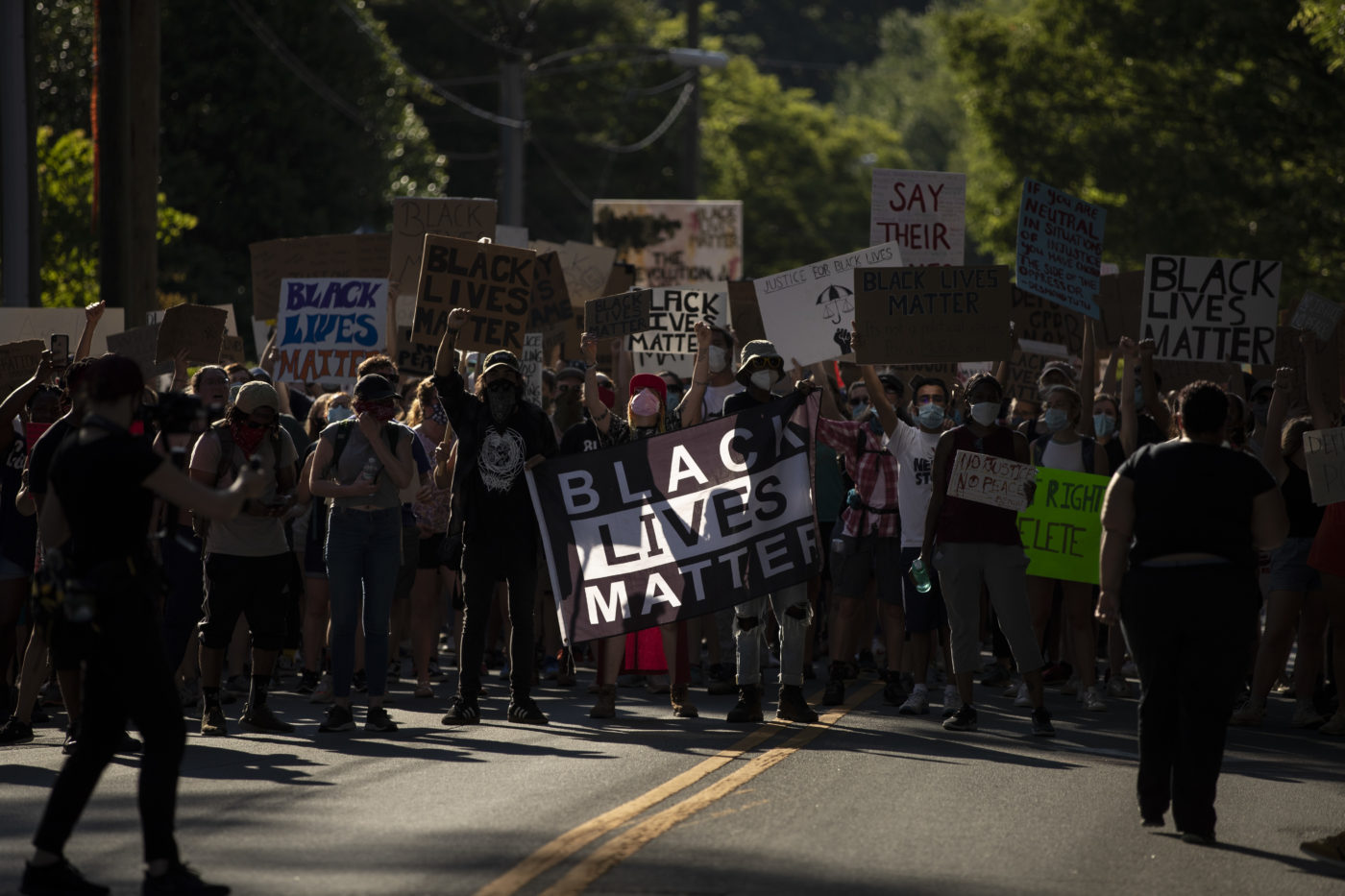 For Monday’s protest, the crowd met up around 3:30 p.m. near University Baptist Church and the George Rogers Clark statue and then headed up Main Street to walk most of downtown Charlottesville.

Charlottesville native Tanya Rush said she protests because she wants the Black community to be treated fairly, such as having lawmakers addressing crimes against Black people  and employers paying them fairly.

Dee Phy, a restaurant worker, said she shouldn’t have to fight a system that was supposed to be made to protect her. She protests, she said, because she wants systemic change, including defunding the police, and allocating the money to education, mental health services, the homeless population in Charlottesville and helping minority-owned businesses start up.

Teidra White, an educator, said protesting is a platform that allows people to speak out and ask for what they want, including justice, equality and basic human rights for the Black community.

All three protesters were among hundreds Monday afternoon who marched to protest racial injustice in the wake of the death of George Floyd. It was the second consecutive day of protests in the city. On Sunday, thousands marched between the University of Virginia and downtown, and there was another demonstration on the Saturday following Floyd’s May 25 death.

A video that swept the globe showed a Minneapolis police officer kneeling on Floyd’s neck for nearly nine minutes while Floyd was held on suspicion of using a counterfeit bill.

Floyd’s death sparked numerous protests, but activists said they’re also protesting for several other Black people who died at the hands of police or outside of our legal system, including Breonna Taylor in Kentucky and Ahmaud Arbery in Georgia.

For Monday’s protest, the crowd met up around 3:30 p.m. near University Baptist Church and the George Rogers Clark statue and then headed up Main Street to walk most of downtown Charlottesville.

“Black Lives Matter” was the most common chant, but protesters also chanted, “Fuck 12,” which includes slang for police, and “These racist cops have got to go.” As they approached Market Street Park, they chanted, “Take it down!” as they passed the statue of Confederate Gen. Robert E. Lee.

Rush said something needs to be done because police brutality has been going on for too long. The mother of two said her sons ― one a soldier and the other a UVA Medical Center worker ― said her sons have not had any bad experiences with law enforcement. But, she noted, she worries about them on a daily basis because she doesn’t know what might happen to them.

Rush said although she has coached her sons to comply with the law during traffic stops, she’s aware that doesn’t always help.

“I told both my sons to watch their backs constantly because they just don’t know ― and not only for my son, but for me, too, because none of us knows,” she said.

As more protests take place across the nation, people have raised concerns about COVID-19 and white supremacists attacking protesters. A Hanover County man, who was later identified himself as the leader of a KKK group, on Sunday drove into a crowd in Henrico County, according to media reports.

Rush said she feels safe and protesting feels like the right thing to do.

“I don’t feel  any fear in me whatsoever when it comes to protesting,” she said. “And I will stand with everybody until the end. I ain’t planning on going nowhere.”

Phy said the demonstrators were not there to cause trouble. As she protested Monday afternoon, she said she felt safer walking with the crowd than just walking on the sidewalk because there were people chanting “All Lives Matter” as she chanted “Black Lives Matter.”

“I am Black. My life matters, and it shouldn’t be a question. I shouldn’t have to defend it,” Phy said.

White said she has had reservations about protesting, especially in Charlottesville. But, she said, she cannot let fear be her voice.

“If we let fear take over, we won’t be heard,” White said.

White supremacists walk among people on a daily basis, said Don Gathers, a community organizer. The protest simply magnified their presence, he said, so he encouraged protesters to be vigilant.

Sunday’s protest drew a crowd of more than 1,000, Gathers noted, adding that he was filled with pride because of what the young generation in Charlottesville was able to accomplish. But the fight continues.

“The four officers being charged certainly wasn’t the end of this,” said Gathers, adding that activists are fighting to defund police departments across the nation because the money can be used to better serve minority communities.