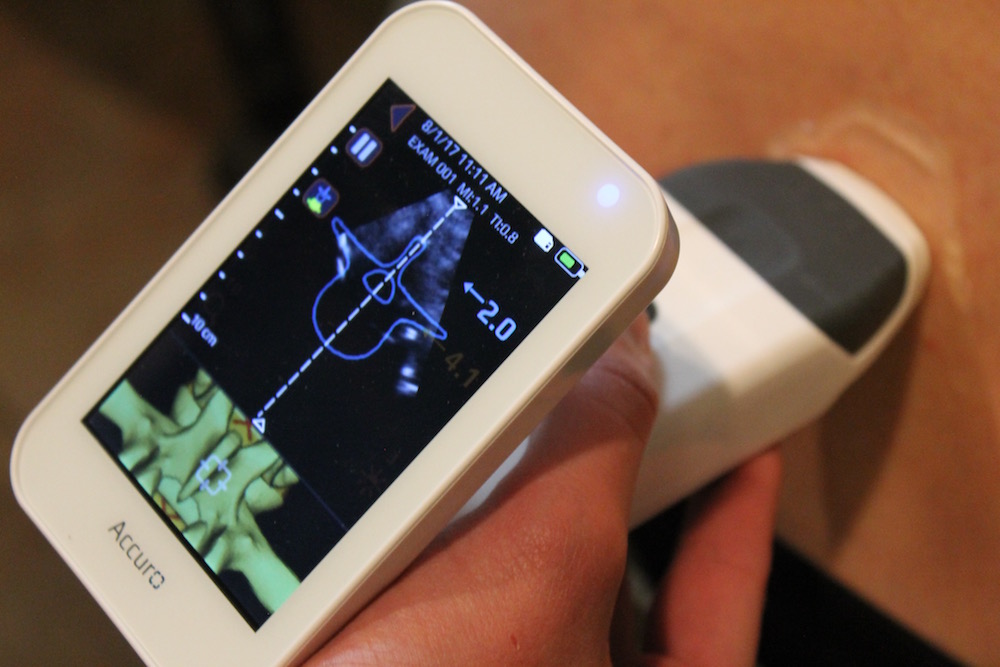 RIVANNA Medical's Accuro device uses an ultrasound-based system to allow anesthesiologists to quickly and accurately locate where to place a needle for an epidural or spinal.

To relieve pain during childbirth and various surgeries, many patients are given anesthesia through an epidural or a spinal injection in their lower back.

Most anesthesiologists use touch to find where to insert the needle, often missing the target space within the spine at least once for each patient, which can cause various complications.

Will Mauldin and Kevin Owen, co-founders of RIVANNA Medical, predict that in two to three years, their company’s ultrasound-based technology invention, the Accuro, will become the new standard of care in administering such anesthesia.

“This is not only going to save a lot of money for hospitals, it’s going to make epidurals much quicker and easier and less stressful, for thousands of women in the world,” Owen said.

When held against someone’s back, the Accuro device can find the exact middle of the spine, called the spinal midline, the epidural spaces between vertebrae where the needle should go and the depth necessary to reach that space.

When the Accuro device was used for obese women during cesarean section deliveries during a recent clinical trial at the University of Virginia Medical Center, the number of spinals that were properly inserted the first time more than doubled.

According to Dr. Mohamed Tiouririne, director of obstetric anesthesia at UVa, the Accuro device is being used at the Medical Center to guide the placement of anesthesia during cesarean births. Tiouririne was involved with past Accuro studies at UVa, as well as ongoing research.

“My dream is that one day we will move from a traditional ‘feel’-based technique to ultrasound-based technique, or even better, combine both techniques to improve the placement of epidural and spinal anesthesia,” he said.

According to Mauldin, most missed insertions fall to the left or right of the spinal midline, so the Accuro device makes a huge difference just by locating the middle of the spine.

After the midline is located, the device’s screen displays color-coded images outlining the bones of someone’s spine and the open spaces between those bones.

“The doctor can see what space is more open than the other,” Mauldin said. “Some people have scoliosis or some type of other abnormality that they may not even know about. And it’s really just not possible to detect that just by feeling the back.”

Finally, the device measures how many centimeters into someone’s back the needle should go to reach the epidural space. With these three pieces of information, anesthesiologists can hit the dime-sized area they’re aiming for much more easily, Owen said.

“We have a tool that is now proven to be effective and to increase success of the procedure,” Mauldin said. “You reduce the number of needle insertions by roughly half, and that’s correlated to reducing complications.”

Beth Clayton, a clinical adviser to RIVANNA, uses the Accuro device in her practice at the University of Cincinnati Medical Center whenever possible.

“Literally, I put it on the back and within a minute, I can have it locate the space for me,” Clayton said. “When you’re able to identify the space correctly up front, you decrease the risk to the patient because you’re not making multiple attempts. And, obviously, you’re increasing their satisfaction, because you’ve been able to give them pain control quickly and successfully.”

Complications associated with failed epidurals include temporary back pain from multiple needle insertions and accidentally puncturing the spinal canal, which lets spinal fluid leak out and can lead to a debilitating, long-term headache.

Owen added that everyone seems to have a horror story about the anxiety and discomfort of an epidural gone wrong.

“It really is stressful [when] you’re giving birth,” Owen said. “If we can make it a five-minute procedure, it’s much better for everybody.”

Before creating the device, Owen and Mauldin saw lots of evidence suggesting that ultrasound imaging should be used for epidurals, yet it wasn’t being employed on a widespread basis.

“The gap that we saw was that anesthesiologists had a lot of difficulty obtaining the skill with a normal ultrasound machine,” Mauldin said.

So, the team at RIVANNA created what they say is the only device in the world that does the work of interpreting information from the ultrasound image itself.

“So, a novice user would not have to acquire the skills associated with ultrasonography, or at least not to its fullest extent, to use this device,” Mauldin said.

RIVANNA sold its first Accuro devices at the end of 2015. Since then, the company has sold about 125 devices to hospitals across the United States, as well as in Europe, Asia and the Middle East. The Accuro costs about $15,000.

The goal for Owen and Mauldin is to reach the point where the Accuro device is considered a standard of care, just like other ultrasound uses.

They said doctors placed central lines going by touch until about 10 years ago, when using an ultrasound became the standard of care by anesthesiology professionals.

“We feel like this is the logical continuation of that trend,” Mauldin said.