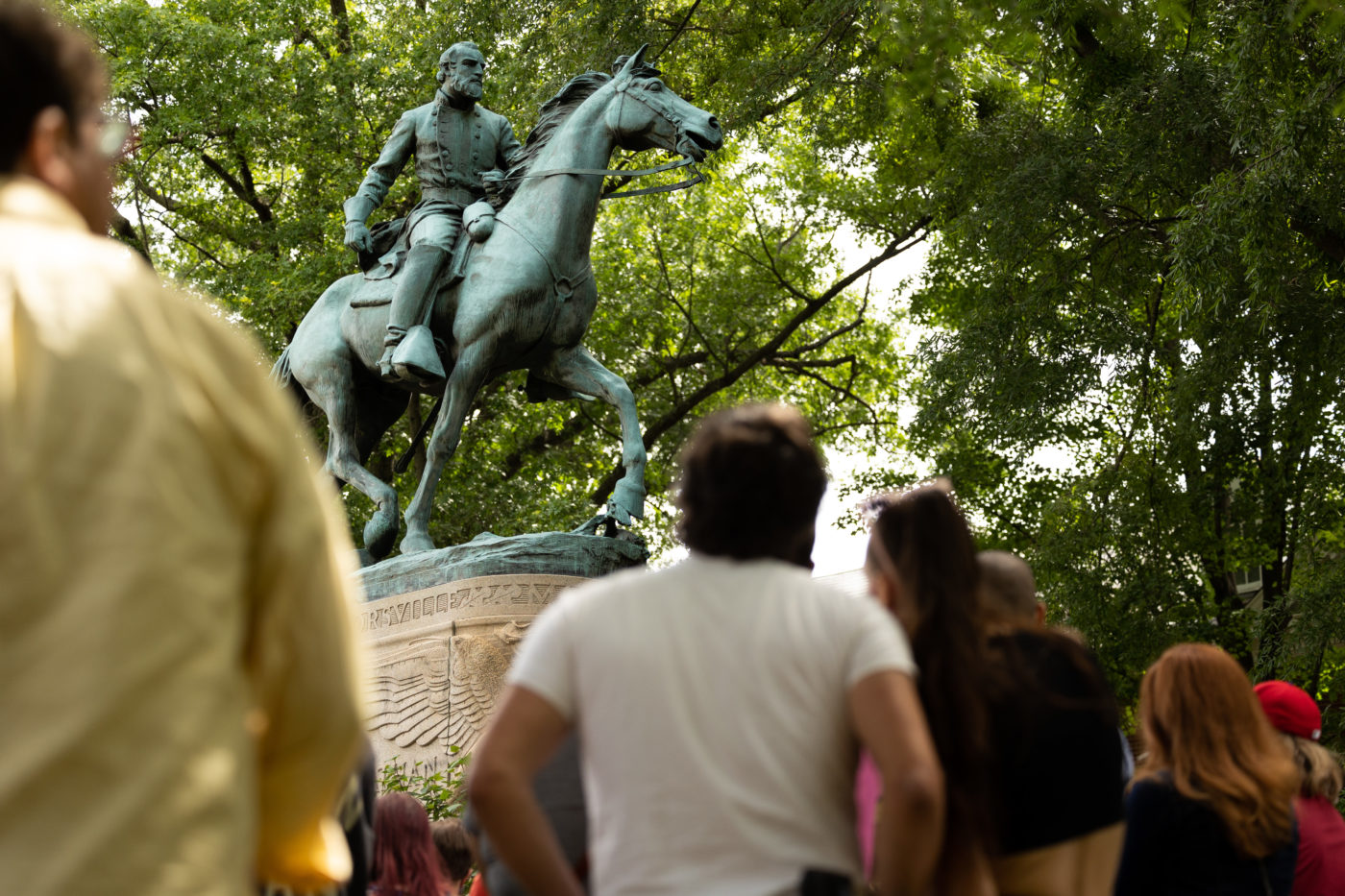 Onlookers view the Thomas "Stonewall" Jackson monument in Court Square on May 31, 2021 during a tour that contextualizes the history of monuments and markers in downtown Charlottesville.

Charlottesville neared the final chapter of its Confederate statue saga on June 7 with the City Council’s formal resolution to remove them. With the council following a process outlined in state law that took effect last summer, the resolution triggers a 30-day period to field offers from historical societies, museums or battlefields.

“Thank you, and let’s do this,” said Andrew Shelton, one of several area residents who called into the meeting to speak in favor of removing the monuments.

The sentiment was echoed by many of the more than 40 speakers during the public hearing.

Zyahna Bryant — who as a teen originally started the petition to remove the monuments and helped inspire a previous council to take action — noted the years of community organizing and implored council to consider their constituents as they take the next steps.

The majority of people who spoke during public comment and during the hearing called for removal or destruction of the monuments.

The goal of removing the monuments has been many years in the making. Following Bryant’s petition, the city’s Blue Ribbon Commission on Race, Memorials and Public Spaces made recommendations for recontextualizing public spaces, and a previous City Council voted to remove the monuments — resulting in a lawsuit and injunction.

The monuments to Confederate Gens. Thomas “Stonewall” Jackson  and Robert E. Lee were erected in 1919 and 1924, respectively — during the era of Jim Crow laws that disenfranchised Black people.

Throughout the summer of 2017, often dubbed the “Summer of Hate,” white supremacists and neo-Nazis frequented Charlottesville — culminating in a torchlit rally at UVA on Aug. 11, 2017, and the Unite the Right rally the following day. In subsequent years, the statues have attracted armed people who claim they are guarding the statues. The City Council passed an ordinance last summer banning firearms from city property and during permitted events.

Some people who spoke in favor of the removal also urged council members to ensure the monuments are gone before the next anniversary of Aug. 11 and 12. A few community members suggested that the city cover the statues in tarps until their planned removal.

A few out-of-state people called in to oppose removal of the monuments, arguing that taking them down would erase history. Others called in to defend the characters of Lee and Jackson.

Wendy Hayslett, who claimed to be descended from a Confederate soldier, urged the council to “sign over” the monuments to Shenandoah Valley Battlefields — where Albemarle County’s Confederate “Johnny Reb” statue ultimately was placed last year.

“This is about love, and honor and respect for our war veterans,” she said.

Of the over 40 speakers during the public hearing, the majority of participants cautioned the council about giving the monuments to other localities. Many suggested the council “melt down” the bronze men.

Reflecting on the public commentary, Mayor Nikuyah Walker noted that the statue removal can be symbolic and as some noted “a good step” in reconciling with racist history and encouraged people who support the monument removal to have constructive conversations with their neighbors about other topics-— referencing historical redlining that prevented Black people from purchasing homes.

“The statues need to go but we also need to remember that the work isn’t complete at the moment,” Walker said.