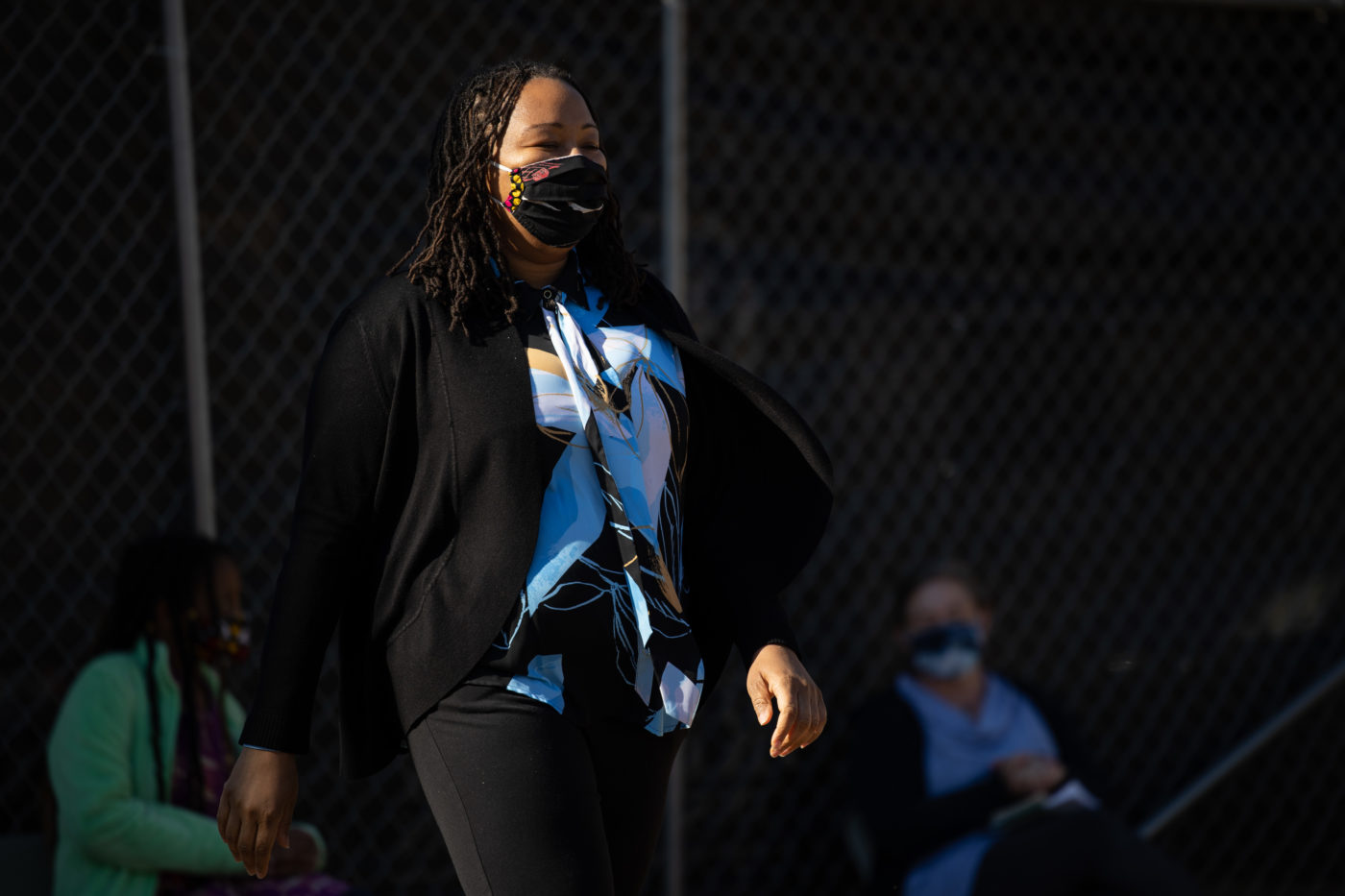 Nikuyah Walker at the groundbreaking of the redevelopment of South First Street on March 7, 2021.

Join our newsletter to get the latest updates directly to your inbox.

Charlottesville Mayor Nikuyah Walker posted a short poem to social media on March 24 that evoked sexual assault and contained vulgar language — following it with a more in-depth version that compared modern-day Charlottesville to the days of slavery. The response to the posts were immediate and intense and by the evening Mayor Walker and Charlottesville were making national headlines again.

Thursday night, Walker joined former City Councilor Wes Bellamy for a Facebook Live to delve more deeply into the conversation she hoped to instigate and the response she had received.

“What didn’t happen was ‘Oh, why would someone use that word to describe Charlottesville? What is Charlottesville doing to its citizens?’” Walker said to Bellamy.

The original post — a shorter version of a longer poem Walker later posted —  read “comforting you in its c** stained sheet and telling you to keep its secrets.”

Walker later elaborated in a subsequent post by connecting the violent and vulgar language to Charlottesville’s history of violence, racism, and slavery, adding that it was as if Thomas Jefferson was “still cleverly using his whip to whip the current inhabitants into submissiveness,” in one post.

Mayor Walker went on to question the authenticity of calls for progressive action in City politics.

“It progressively chants while it conservatively acts. Charlottesville is anchored in white supremacy and rooted in racism,” Walker wrote in her poem. “Charlottesville rapes you and covers you in sullied sheets.”

Reactions to Walkers post on social media poured in, accusing her of mental illness, racism and re-traumatizing rape victims. But in the days following, a more complex reaction to the Mayor’s actions began to bubble up.

Local influencer and media personality Jerry Miller spoke against Walker’s post in a recent episode of his “I Love CVille” show and tweeted that she had “once again humiliated Charlottesville, Virginia on a global scale.”

Democratic city council candidate Yas Washington joined Miller as a guest on the show, where they discussed the posts as well.

During his conversation with Washington, Miller stated that he and others “couldn’t get by some words in that poem to understand what the message truly was.”

Washington said that Walker’s posts created the perception that the city has not made any progressive progress, and that the sexual violence and vulgarity should not have been in the post — calling it a “political nightmare” and a “public relations nightmare for people to scroll and see the Charlottesville mayor talking in that manner.”

“If we’re going to talk about history, we should talk about progression and the history that has gone right,” Washington said.

Meanwhile, though Walker’s fellow council member Michael Payne took issue with the evocation of rape in her post without a trigger warning for sexual assault survivors, he said he saw a call to action for more meaningful conversation in Walker’s poem and that addressing the city’s history of racism will help inform progress going forward.

“I think it’s definitely true there are deeper, more impactful conversations we need to be having,” Payne said in an interview with Charlottesville Tomorrow. “I think it’s people confronting history and understanding how the legacy of past policies still impact the community today.”

Activist Don Gathers said Friday that he believed Walker was invoking violent history in order to be constructive.

“People don’t want to address the ugly history of this area and this country and unless and until they are willing to face that reality, we won’t be able to actually move past some of these issues,” he said. “I think she was trying to bring some of that to the forefront to say, ‘Hey, we’ve still got some real issues here.’”

On how many community members were shocked by the language used in Walker’s post, Payne hoped others would “see the complexity in people and not just put them into a bucket of good or bad” in order to have deep conversations.

During her conversation with Bellamy, Walker directly connected her poem to modern-day policy-making and the different lived experiences of white, affluent area residents as compared to some Black residents.

“What is survival-only mode when you don’t have the ability to ever contemplate the possibility of thinking about dreaming and thriving? What happens when everything that you own can be snatched up by the vote of five people on a development that can change your whole world?” she said.

Affordable housing has become a hot topic among elected officials and candidates in recent years. The city is currently working with consultants to update its comprehensive plan, with much of the focus on how to create a more affordable and equitable housing market.

“This community is over 70% white. It’s a very wealthy community,” Walker explained. “And it is important for people to understand when their privilege is shaping their thought process and conversations … White people cannot take direct conversation. Y’all want to beat around the bush ‘it’s too hard, let’s not talk about it’ type of stuff.”

Following the deadly 2017 Unite the Right rally, Charlottesville made national headlines and already established racial justice work locally became amplified. A sentiment widely shared by white residents in the aftermath of the attack was that the white supremacists and Nazis marching through Charlottesville did not represent the communities in the city.

Instead, Niya M. Bates, a historian who grew up in Charlottesville and formerly served as Monticello’s Director of African American history, tweeted recently that while much of the local community decried white supremacy, the state of local government remains in a state of structural opposition.

“More accurately, they tried to dissociate from a certain brand of white supremacy while resting comfortably in the white supremacy of a city wholly designed around their interests, budgets, and style,” Bates wrote. “Nothing in this town reflects an investment in true racial justice.”

Bates pointed to “white liberal lip service” on policies towards affordable housing, police reform and living wages,  while “public housing languished for decades.” and education disparities widened. Bates noted how these things played a role as well in Charlottesville’s shrinking Black population as people moved to other localities where they could find gainful employment and affordable living.

“If folks focus either on the messenger because she has so many detractors or the way that the message was presented then they totally miss the underlying root of what she was saying,” Gathers said.

Gathers noted that some of the backlash from Walker’s post also relates to how “a lot of white America takes issue” with how Black people protest.

City council candidate Washington said she perceived Walker’s poem as coming from a place where Walker may not be seeking reelection. Though Walker previously had intentions in Feb. 2020, she has not stated if she is still running this year. As an independent candidate, she is not subject to the June 8 primaries.