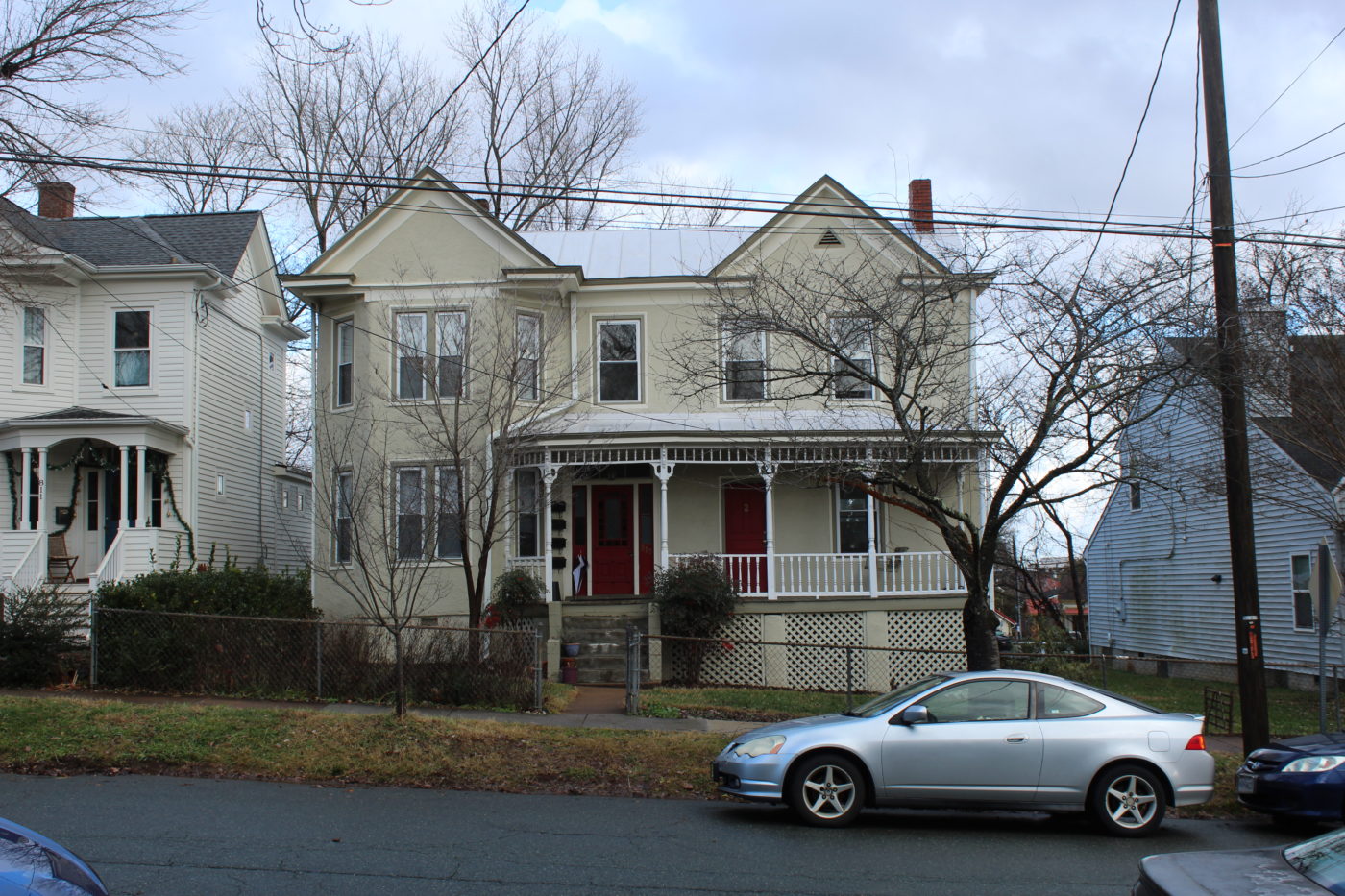 A fourplex in Belmont.

In many parts of Charlottesville, it is illegal to build duplexes and other types of houses meant for multiple families. The consequence, according to the city’s Planning Commission, is unaffordable housing and segregation.

Commissioners are hoping to contribute to city efforts to confront these problems through the land use chapter of Charlottesville’s Comprehensive Plan, which is currently being updated.

On Dec. 17, the City Council offered support for the Planning Commission’s vision and critique of the specifics of the plan’s future land use map.

“R1 [single-family] zoning doesn’t need to be what it is today in the future. I think we all can get behind that, and that is where we can get that density throughout the city in a much more meaningful way,” Councilor Heather Hill said.

Changing the Comprehensive Plan future land use map does not change the zoning laws that apply to any property in the city. However, commissioners hope to use the plan and extensive community feedback to change zoning law in the near future.

“Our zoning is a ‘wastebasket of errors,’” said Commissioner Lyle Solla-Yates, quoting Alexander Ikefuna, director of the city’s Department of Neighborhood Development Services. “We can fix it, but it will be hard and expensive and will take time, and this will be the guide to give people what they want.”

The future land use map envisions a gradual transition between low-intensity neighborhoods and high-intensity job centers.

The low-intensity neighborhoods still would be primarily residential, but “single family, multiplex, townhomes and other smaller scale residential structures are encouraged,” according to the map key.

Solla-Yates wrote the language for increasing density in previously single-family neighborhoods, drawing on several years of research into zoning in Charlottesville.

Solla-Yates said that, like cities across the South, Charlottesville implemented zoning as a new way of enforcing segregation. The Supreme Court upheld cities’ rights to restrict land uses on private property in the 1926 Village of Euclid, Ohio v. Ambler Realty Co. case.

“Which was interesting, because the lower court was like, ‘This is obviously segregation. Are you kidding me?’ The Supreme Court didn’t address the issue at all,” Solla-Yates said. “That’s when we got the 1929 zoning right here in Charlottesville.”

That zoning restricted development across much of the city to detached houses and duplexes. A letter to the editor at the time said the zoning “savors of a spirit of exclusiveness.”

“The idea of the map was rich whites in the north, African-Americans in the lower areas that were smelly and caused disease and by the railroads, and then anywhere else, poor whites could live,” Solla-Yates said. “We’ve just carried that map forward.” 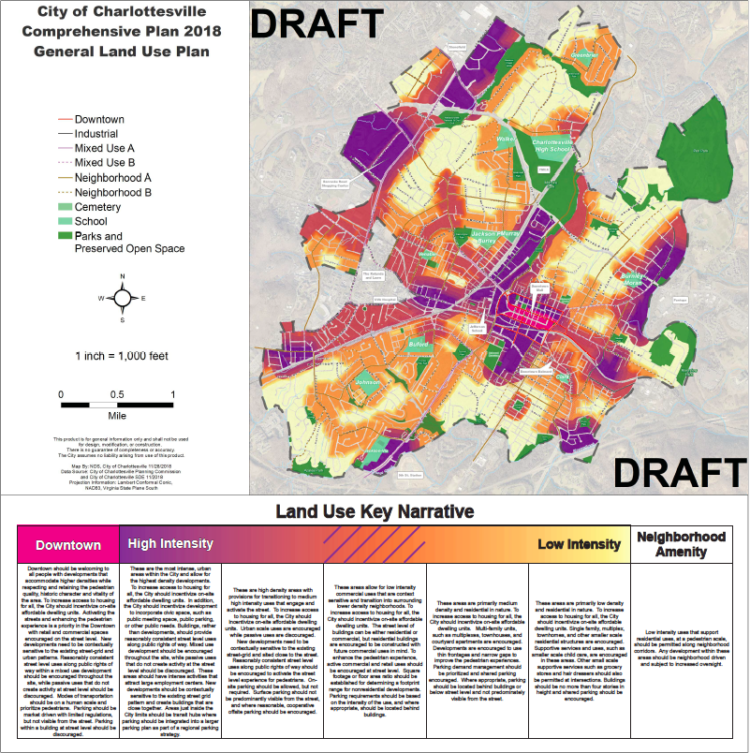 The future land use map envisions a gradual transition between low-intensity neighborhoods and high-intensity job centers.

In addition to higher density, the new Comprehensive Plan map narrative encourages small-scale childcare, grocery stores, hair salons and other supportive services in the low-intensity areas. The narrative also provides a category for neighborhood amenities, which would be driven by neighborhood demand.

“I, and probably most people, very much like the idea of being able to walk or bike to a coffee shop, a barber shop or a little grocery store,” Ned Michie, president of the Greenbrier Neighborhood Association, said by email. “Yet, no doubt most people will be less happy when the reality comes in the form of a specific proposal that is deemed ‘too near’ one’s own house.”

“I look at this, and I look at Rose Hill, 10th and Page, Fifeville and lots of the Woolen Mills all going into a high-density area, and that suggests to me that — are we looking at a city the scale of Alexandria, where we’re 150,000 people in 10 square miles?” Galvin asked.

Charlottesville’s population is 49,132, according to an estimate by the University of Virginia Weldon Cooper Center for Public Service.

Most of the high-intensity areas on the future land use map came out of extensive public engagement over the course of two years. Planning Commission Chairwoman Lisa Green said the commission asked people what they liked about Charlottesville and about where they like to be.

“We heard a lot of people talk about their community and where they live, but they’d like to have amenities in their area,” Green said. “Affordable housing is [an amenity] missing from almost all, [as well as] a lot of services that we were talking about that would make that ideal place.” 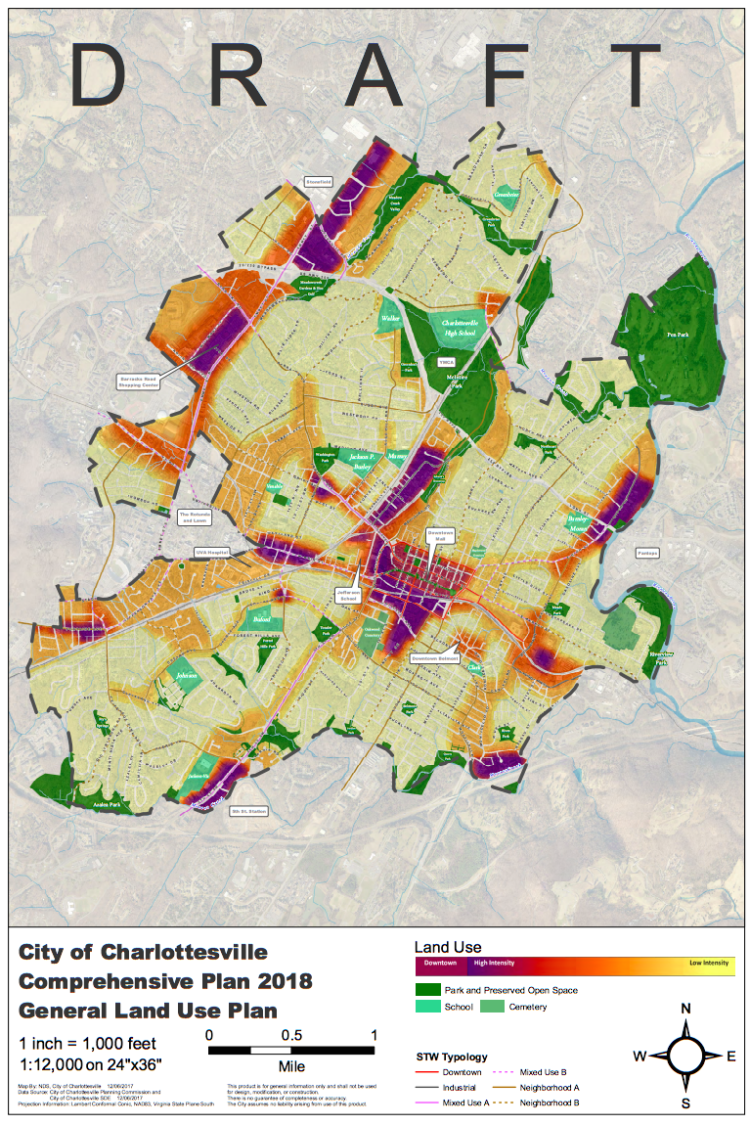 The draft Comprehensive Plan land use map published in Dec. 2017

The commission worked with city staff to produce a map based on the feedback, which was published in late 2017.

After calls from social justice groups for more community engagement, the commission, several councilors and city staff conducted an online and in-person survey. Starting in September, the commission used the new information to finalize all but two chapters of the Comprehensive Plan draft.

The land use chapter received its major rewrite during an all-day work session on Nov. 17. The commission as a whole agreed upon the map narrative but allowed the four members appointed since the previous map was drawn to take the lead in redrawing it.

Rory Stolzenberg, who was appointed to the commission in October, advocated for increased intensity next to the University of Virginia.

The Planning Commission plans to incorporate the City Council’s feedback and finalize the land use and community engagement chapters at a work session at 10 a.m. Saturday in the Neighborhood Development Services conference room in City Hall.