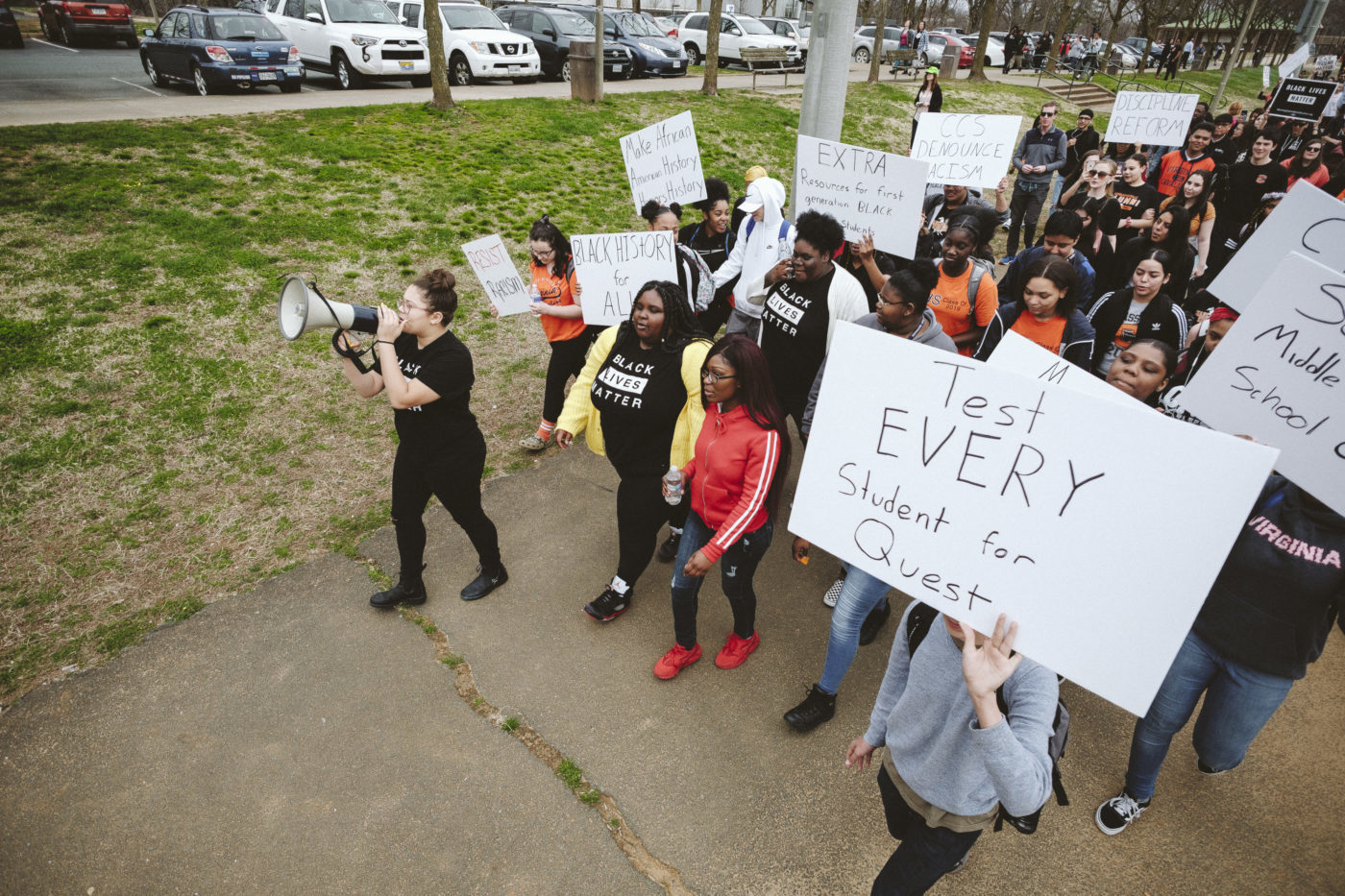 During the Black Student Union-led walkout in late march, students demand that school administrators test all students for Quest.

Atkins to seek funding from city for additional gifted specialists

In hopes to better serve students equitably in a recommended model of the Charlottesville City Schools’ gifted program, Quest, the board approved on Thursday superintendent Rosa Askins to seek funding from the city for additional gifted specialists.

“As we build this new model, it became apparent to us in order to execute the model with fidelity…. [I ask we] increase the number of teachers for the gifted program that we have by eight,” Atkins said during the meeting.

The new employees will cost roughly a total of $620,000 including benefits.

Charlottesville parents and community members were informed for the first time about some of the improvements of the division’s gifted program, but board members were previously updated on the changes on May 31, the first day of a two-day retreat in Richmond.

Additionally, the division plans to move its universal screening, or formal identification, from first to third grade.

“I believe that all students are gifted,” she said in an interview. “All students have great potential.”

The newly designed gifted program also includes bolstering a push-in teaching model that allows all students to receive instructions at the same time as gifted specialists collaborate with classroom teachers.

In 2018, racial inequalities came to the forefront after an article by the New York Times and ProPublica focused on the division’s gifted program. The school system overall is 43% white, 37% black, and 11% Latino; 73% of students in Quest are white, 13% are black and 5% are Latino.

Atkins said in an interview that black, brown and English learner students are underrepresented in Quest, adding the push-in model is one way to address the disparity.

“By moving to that push-in model, we’re creating a more equitable model that really does focus on all students,” she said.

“Test developers have tried over a long period of time to separate the two and just get the ability test without the experiences having an impact, but that hasn’t happened,” Atkins said. “Because oftentimes the experience influences the test score, we want to make sure we give all students an opportunity to show their ability. So, a non-verbal test will help us to do that.”

Several parents lauded the improvements in the gifted program during a public comment session. But some are concerned with the division moving rapidly to hire new gifted specialists to strengthen the new model.

Board members won’t meet in July. The next board meeting is set for August, meaning improvements in the new model will then be approved around that time.

Atkins said the division’s gifted program has been an issue that has been discussed for many years, specifically before and during her tenure.

“There’s something about when the time is right, and you move into action,” she said.

She stressed she cannot go back and ask previous superintendents and board members why they didn’t make the changes, but she can decide to advocate for changes to achieve equity now.