On Memorial Day, Andrea Douglas and Jalane Schmidt gave a tour of downtown’s remaining Confederate monuments. They hope it’s the last one. 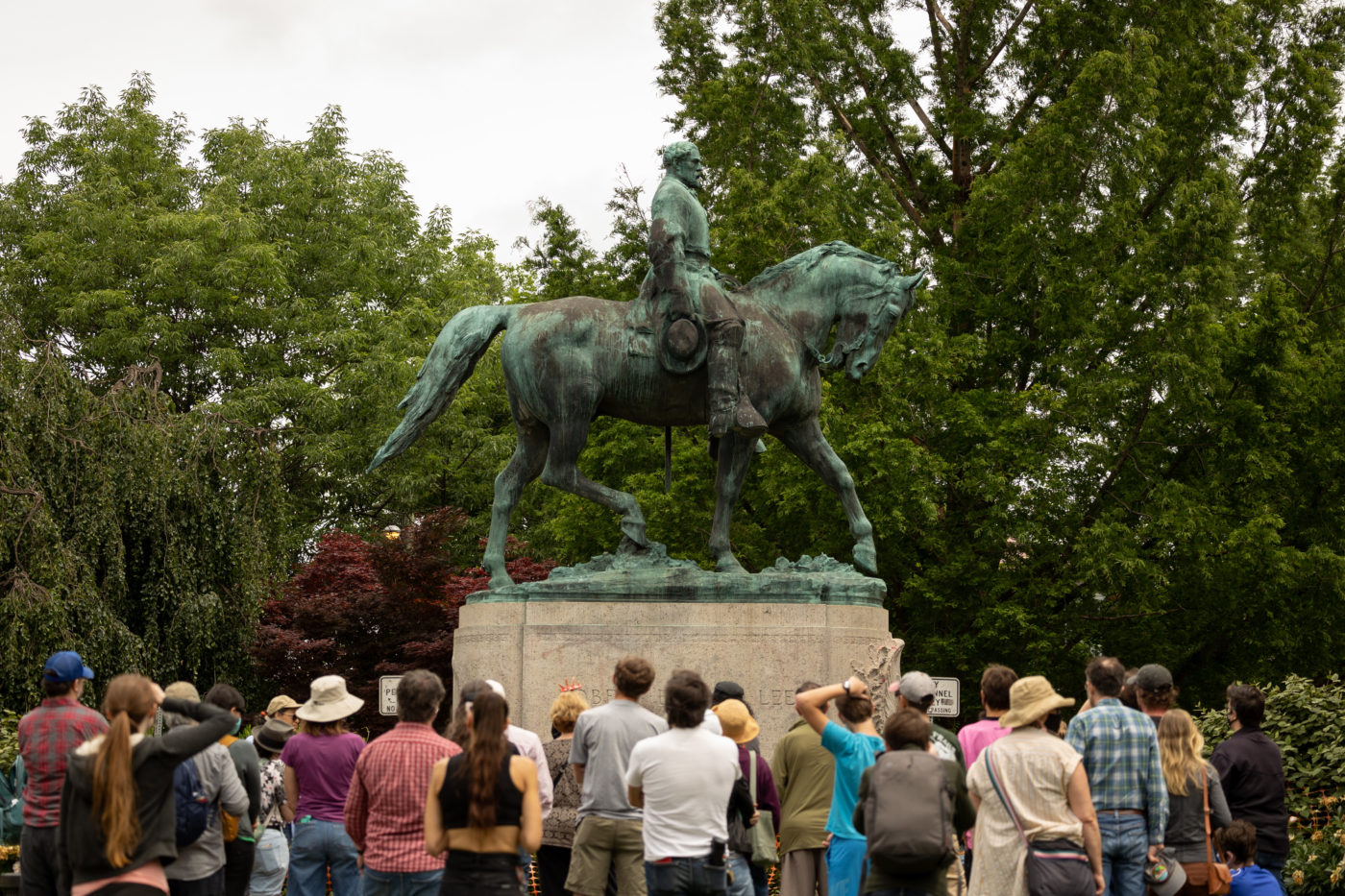 A crowd of more than 60 gathers near the monument to Confederate Gen. Robert E. Lee as part of a walking tour to contextualize the history that area monuments represent along with the history of when they were erected.

“This is what we hope is one of the last tours that we give,” said University of Virginia professor Jalane Schmidt to a crowd of more than 60 people gathered outside of Albemarle County’s courthouse, where bronze idols to two Confederate generals — the subjects of her tour — loomed nearby.

The statement was met with applause from the crowd.

Schmidt was joined by Andrea Douglas, executive director of the Jefferson School African American Heritage Center on the sunny Monday morning tour, one week to the day before the Charlottesville City Council is expected to vote on the future of the Robert E. Lee and Thomas “Stonewall” Jackson monuments. The two historians have led tours of the area for three years to contextualize the monuments based on details like the dates of their erections — during the era of Jim Crow laws that disenfranchised Black people — their placement in public spaces and the presence of the Ku Klux Klan at the time of their establishment.

“It’s no accident where these statues are being placed,” Schmidt said, noting that the courthouse is where Black people were once sold.

She and Douglas went on to describe how the area west of the courthouse was once a predominantly Black neighborhood, McKee Row, that was purchased by area entrepreneur Paul Goodloe McIntire and transformed into the public park where the Jackson monument now stands. Blocks away, the monument to Lee presides over another formerly white-only park overlooking the Vinegar Hill neighborhood — a predominantly Black neighborhood that was razed and redeveloped in the second half of the 20th century.

“This is a story about placement and erasure, about emphatically claiming space and claiming dominance,” Douglas added. 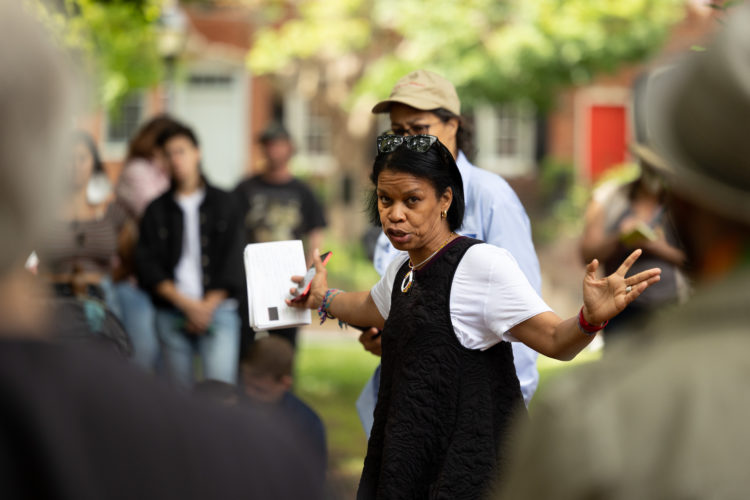 Andrea Douglas describes the intention of placing the monuments where they reside within what are now named Court Square and Market Street parks.

Schmidt and Douglas explained that the  placement of the statues — 1919 and 1924 — coincided with the annual reunions of Confederate veterans or descendants as well as the Racial Integrity Act, which contained laws like a ban on interracial marriage and defined white people as having “no trace whatsoever of any blood other than Caucasian.” The local Ku Klux Klan chapter was also formed around these times.

Flash forward to 2021 where — following years of litigation, a change in state law and a deadly white supremacist rally — the monuments can now legally be relocated or destroyed. At its June 7 meeting, the City Council plans to hold a public hearing regarding the future of the statues. Thirty days afterward, the statues could be removed. The city is following a process outlined by state law created in 2020 despite the Virginia Supreme Court’s recent mandate that Charlottesville’s monuments were never subject to former state law that protected war memorials. 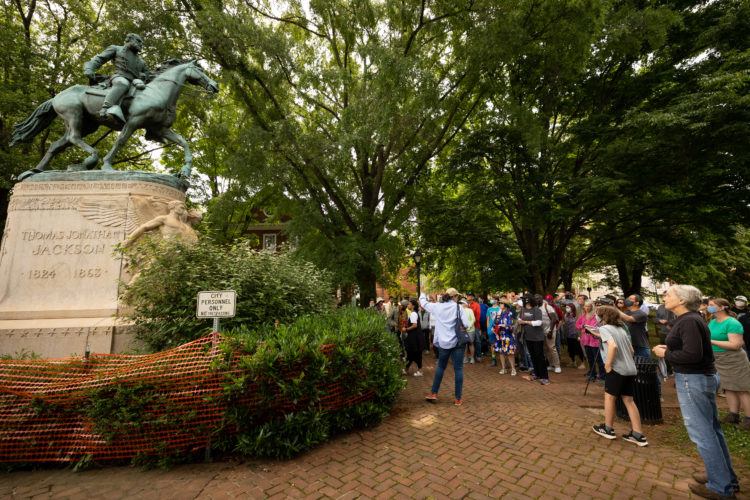 Jalane Schmidt points to Confederate symbols on the base of the Thomas “Stonewall” Jackson monument.

However, a previous City Council had tried to remove the statues and faced a lawsuit that spanned several years. Following the deadly Unite the Right rally in 2017, the statues have remained surrounded by an orange plastic fence with “no trespassing” signs — and at one point were covered by black tarp.

As the crowd gathered from point to point on May 31, Memorial Day, Schmidt noted the overgrown nature of the foliage surrounding the monuments. Bushes have grown through the plastic fencing, and some portions of the fence have come unattached.

“The city isn’t even tending to this part of the park,” she said. 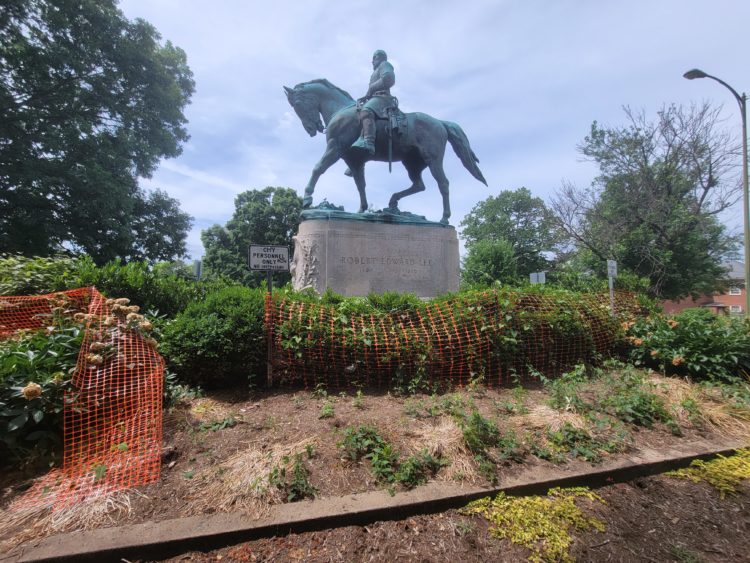 Foliage grows through the fencing around the Lee monument and part of the fencing has fallen into disarray over time.

As the next chapter of the monuments saga continues next week, council can begin accepting applications from interested organizations, museums or battlefields to take them. The council also has the ability to deny any offers. In recent months, community members have urged council to either destroy the statues or be very mindful about what new space they could occupy after being removed from Charlottesville.

“[The statues] romanticize the Confederate cause, erase the suffering of slaves and downplays the role of slavery as a cause for the [Civil] War,” UVA professor John Edwin Mason previously told Charlottesville Tomorrow. “The Lost Cause remains a cornerstone of white supremacy and we don’t want it to continue to tell that story in public space.”

In the meantime, Schmidt and Douglas concluded their tour with a call to action for people to participate in the forthcoming public hearing to voice their hopes for the future of the monuments. 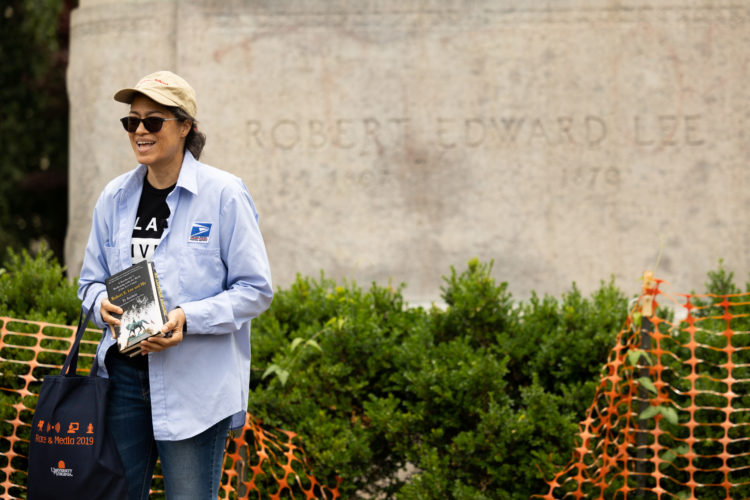 Jalane Schmidt discusses additional resources to learn about the history of the Confederacy and its lingering ideologies.