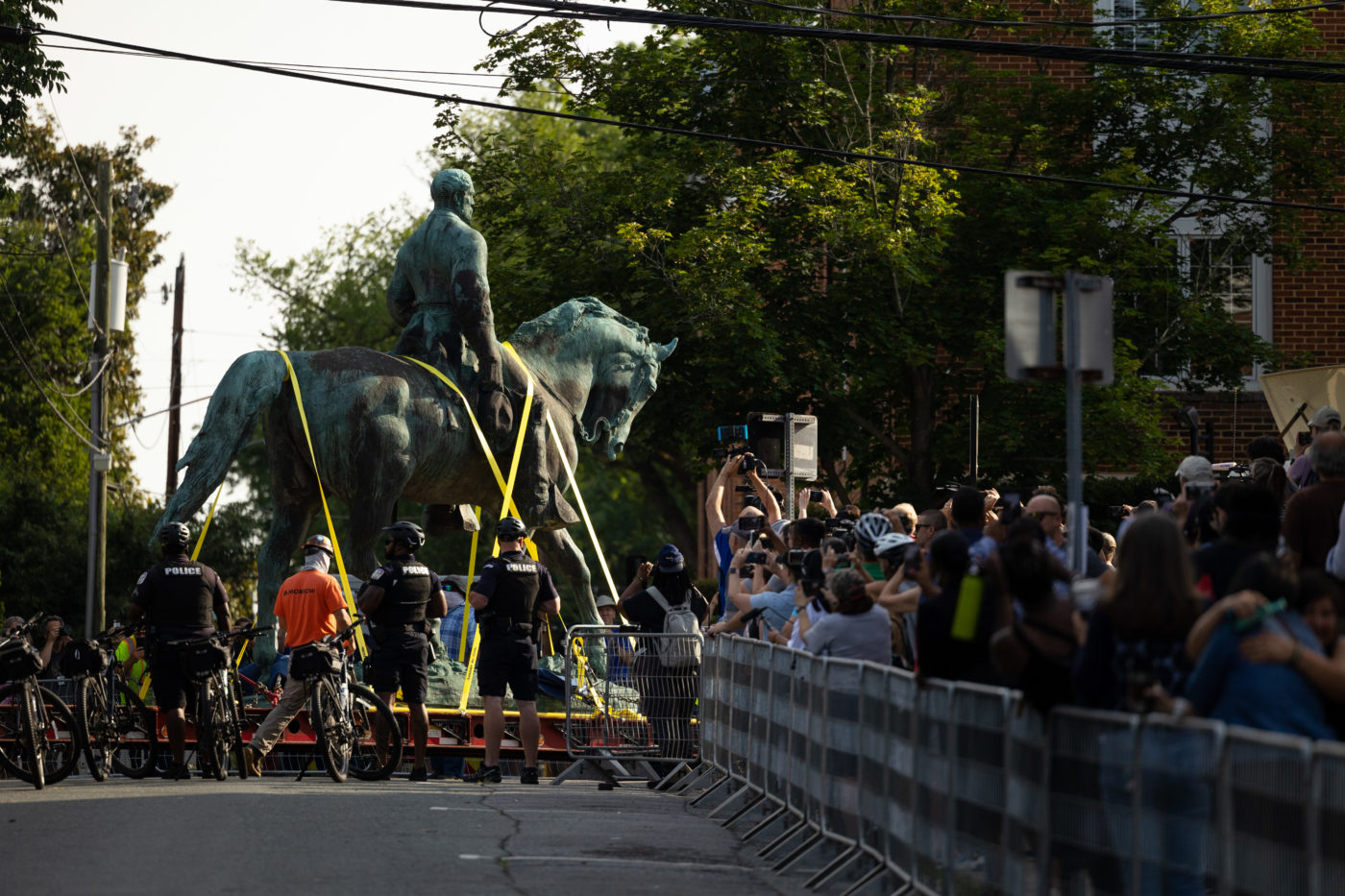 The statue of Confederate Gen. Robert E. Lee is loaded onto a flatbed truck the morning of July 10, 2021, after being removed from its pedestal.

The statues of Confederate Gens. Robert E. Lee and Thomas “Stonewall” Jackson astride horses were plucked from their perches in downtown Charlottesville early Saturday morning and hauled off by truck to an undisclosed storage location. Their heavy stone bases will remain in Market Street and Court Square parks until the City Council decides whether to give the statues to any of the 10 interested parties.

Bryant is one of several local activists and politicians whose advocacy helped the removal come to fruition. 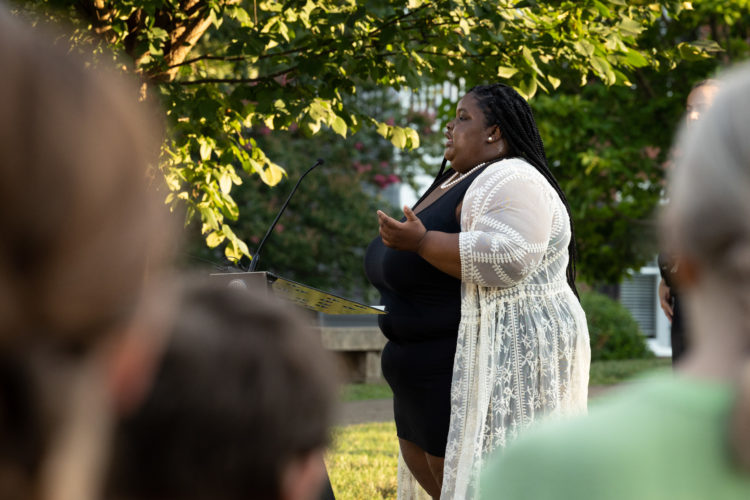 Zyahna Bryant, now a University of Virginia student, speaks before the removal of the Confederate Gen. Robert E. Lee statue from downtown Charlottesville. Bryant petitioned the City Council to remove the statue in 2016, when she was a Charlottesville High School student.

“I’m proud to be a Black woman today, and I’m proud of how Black women are just shaping things up all over the country in many different ways,” Bryant said.

She added that however happy the day may be for her to see the removal of the monuments, if the occasion is to really mean something, the city will need to continue to create equitable environments and address the effects of racism.

“There’s a lot of work that must go with this,” Bryant said. “I’ve been saying a lot that this is only a symbolic gesture if there isn’t institutional and systemic change that goes along with it.”

On local systemic changes, Bryant reflected on the city’s current process to update its Comprehensive Plan and draft a Future Land Use Map. Noting historic racial covenants that kept Black homeowners out of parts of the city and past actions, like the razing of the Vinegar Hill neighborhood, Bryant said a focus on equity within future land use planning is crucial.

“This is important because city planning helps determine who is interacting with who, where people are going to work, where they’re eating, things like that,” Bryant explained. “When we are talking about lack of access for certain communities, these are the moments where those communities must be kept in mind, but also be consulted for their actual needs and opinions.”

Meanwhile, the sentiment was also echoed by University of Virginia professor and activist Jalane Schmidt.

“That thing is gone now, but those values that put it there, that kept it there are still here,” Schmidt explained. “We can’t just pat ourselves on the back and say, ‘We undid a racism.’ There’s still a lot of work to do, this is just a more visible symbol.”

Schmidt, who has led walking tours of the area to contextualize the monuments and historic spaces also lobbied to the General Assembly, resulting in a change in state law that allowed localities to decide if they wanted to relocate or remove their war memorials. Democratic Del. Sally Hudson, who represents Charlottesville, was among the votes to pass the legislation. 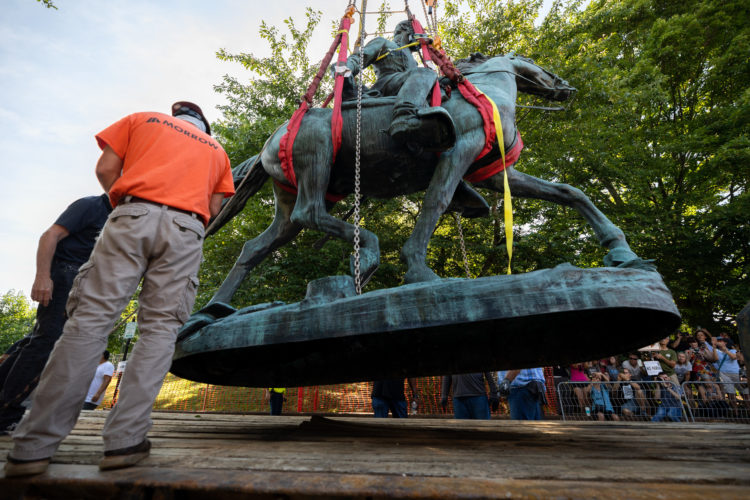 Five years ago, Bryant – then a student at Charlottesville High School – set into motion Saturday’s removal and had an influence on state, local and national discussions on race, reckonings with America’s past and objects of veneration. Soon after, a commission convened to recommend removal of the monuments, and the City Council at the time officially voted for their removal. The 2016 vote allegedly violated state law and the council was sued. Several years of litigation later, following a change in state law and Supreme Court of Virginia ruling, Charlottesville finally joined several other Virginian localities in removing its Confederate monuments.

As July 10 marks the first day Market Street Park and Court Square are not home to bronze men representing a country that no longer exists, Schmidt said she doesn’t think the city needs to rush to figure out what the spaces can be transformed into yet.

Schmidt reflected on how the monuments came to be — erected during an era of Jim Crow laws that disenfranchised Black people — and said she hopes any transformation of the parks come to pass through community input and feedback, which “didn’t happen last time.”

“I hope that going forward we can be more democratic in our process,” Schmidt said. “I think the process is as important as whatever might go in there.”

As the statues have been placed in storage while the city determines their future resting place, community members have cautioned the city about where it may send the monuments next. As Albemarle County fielded offers for its “Johnny Reb” statue last summer — ultimately deciding on Shenandoah Valley Battlefield Foundation — offers were received from historical societies, museums, Confederate groups and even a private resident.

Charlottesville Tomorrow has sent a Freedom of Information act request to learn about the offers the city has received so far and should receive details by next week.

In the meantime, activist Don Gathers said if the statues should be placed in public again, that the context matters.

“We’ve seen the destruction these things can attract and I would have to inflict that in another locality,” Gathers explained, referring to the deadly white supremacist rally that occurred in Charlottesville in 2017. “So a museum or a battlefield are the only public spaces I think these things should be in, if any.” 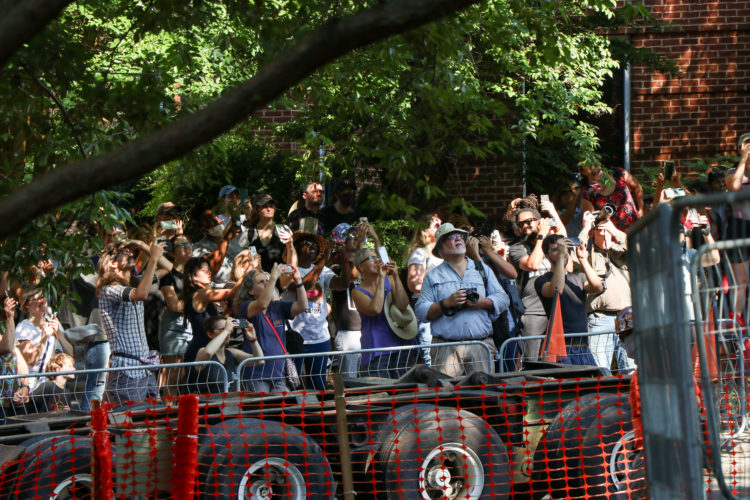 People gathered in downtown Charlottesville on July 10 to watch the removal of the city's two Confederate monuments.